An Insight Into the World of Art With Jerry Saltz 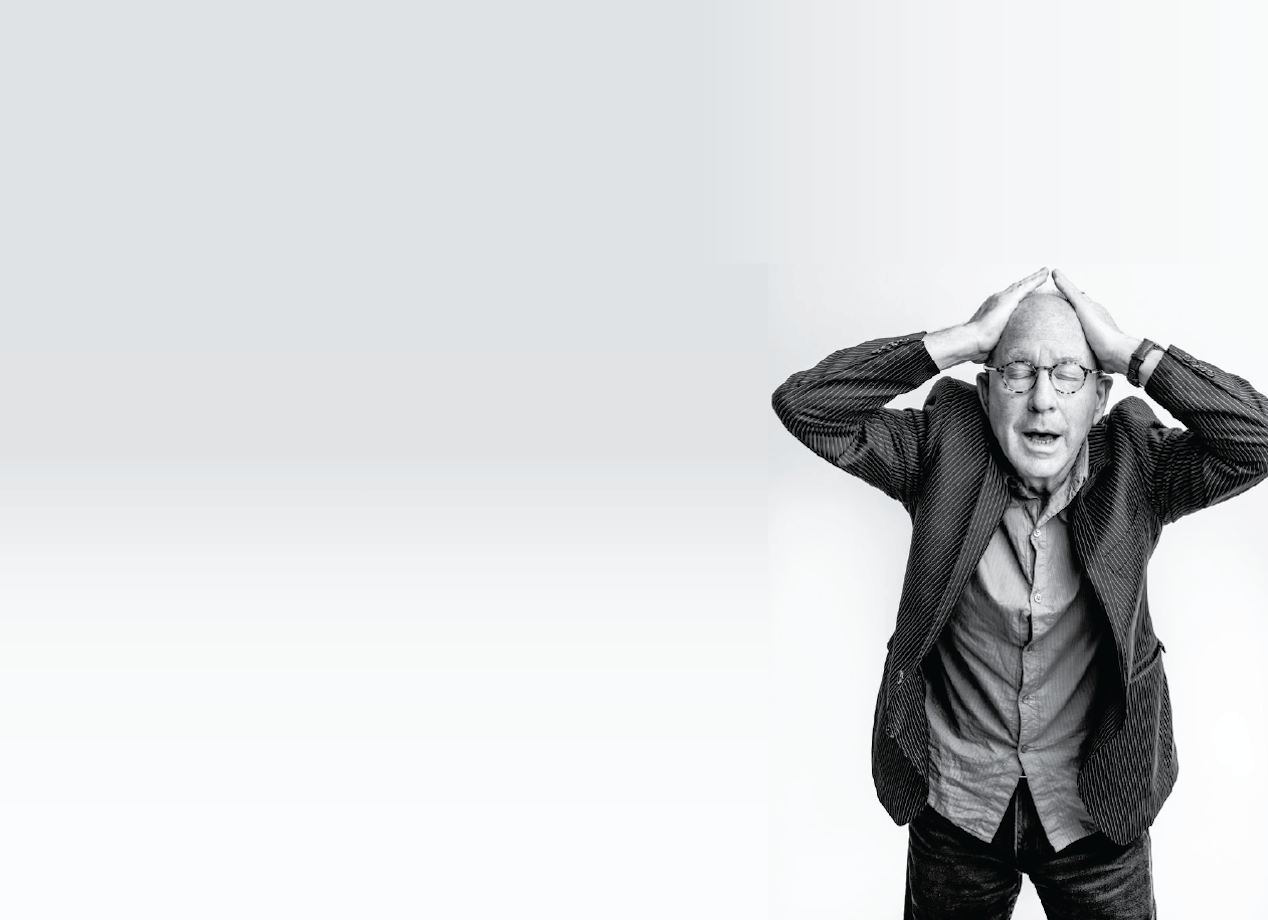 Pulitzer Prize winning Jerry Saltz dropped by for a discussion at Sotheby’s Institute of Art-New York and dealt out invaluable wisdom and anecdotal gems with sharp humor.

Known for his direct and truthful criticism, Jerry talks about the importance of openness, listening to your gut and wholly immersing yourself in the world of art. Below is a snapshot of this extraordinary and inspirational man, an essential read for all aspiring art critics.

How did you start your art career?
I have no degree and I did not go to school. I was a long-distance truck driver until I was 41 years old. I drove from New York to Florida or New York to Texas. One day in the trucks when I was about 39, I thought I'm so depressed, I'm so miserable. I was living on Avenue B in a squat with drug dealers and dogs living in the hall. It was a madhouse. So I decided, I bet being an art critic would be easy. I could meet women and become rich and famous.

What's the first thing you do at work?
I'm an early riser. I get up around 7:30am. I now have found a great routine where I calm myself down by basically just scrolling Instagram or Twitter. I usually will post too, and I never know what I'm going to post before I post it. I then work for a few hours before taking a walk.

How does social media feature in your practice?
I don't think you can be a curator, I didn't say ‘good’ curator, if you're not on Instagram. If you follow me, I post artists that have never been seen anywhere by anybody. It doesn't mean I love their work. It just means that there was 1% that I saw that seemed momentarily convincing and  I wanted to see what an audience would think. I don't follow up on it, that's your work. My belief is that our whole lives we've been spoken to in a pyramid, with the one speaking to the many. That's the model. But with social media, the many can speak to one another. And the other thing is I block cynics. I hate cynicism, it makes me sleepy.

How do you approach your writing?
I sat in those long-distance trucks month in and month out, and I brought Art Forum magazine with me. The kind of school newspaper of the art world. I read this magazine and I didn't understand a word of it. It speaks in a language I call ‘dissertation’. Too many art critics today do, and I don't want you to fall into this bad practice. It doesn’t talk to people. Art is much, much more interesting than dissertation talk. I started writing what I really think, and I became free. You are a freedom machine. You must be willing to have the nerve, without being cruel, mean, and callous to start saying what you think. What I want you to have is the credibility of your voice. The feeling is always incredible.

Without a background in art, how did you begin critiquing?
I would try to see as much art as I could and compare it to the art produced within the same period. How is it the same, how is it different? How does the art handle material and surfaces? Not just analyze the image. If you reduce painting or art to just an image, you're stuck with subject matter over and over again. And that's just not enough for me. I learnt about my own tastes that way. Your taste is telling you something all the time, never deny it. It is subjective, you cannot prove that Vermeer is better than Norman Rockwell, but you want to be able to explain why the Vermeer might be bottomless and Rockwell is wonderful and sentimental.

What’s the first painting you saw?
At 10 years old, my mother left me at the Art Institute of Chicago all alone. A piece by Giovanni de Payola, a renaissance artist, of the beheading of St. John the Baptist caught my eye. I looked back and forth and back and forth for what felt like forever, and it was the first time I understood that paint surfaces, color, shapes, scales, mediums, and narrative were telling a story. And I looked around at that museum and I never felt this feeling before and I thought, I will grow an invisible antenna and I will intuit the world, but my mother committed suicide a month later. You all have traumas, there's mine. Your trauma is normal to you as much as mine is normal to me. And I'm still trying to grow those antennae.

How many exhibitions do you visit in a standard week?
Before the pandemic 15 to 20. And when I was a little younger it would be 20 to 30 a week. I want you to see the galleries nobody else sees. You have to see everything, and then you will learn everything. Pick your guts.

Do you think that the art world has become more insulated since you began working?
I definitely think the more open the art world could be, the better. Someday there may be a Francis Bacon of NFTs, you just don't know yet. It’s like when lithography came out everybody went, ‘that can never be art’. Botha Laird, the greatest critic of his time, said photography is not art and it will ruin painting. I think the art world has become insular but that's breaking now, and no one is in control anymore.

How do you think art has changed with the trauma the world has experienced in the past two years?
I watched the Twin Towers go down, some of you saw it on TV, others in person. We witnessed annihilation, the two largest things on Earth evaporated. No one had ever seen that. We didn't know if life was lost or not, that's the first thing. We're watching ethnonationalism everywhere. The flirting with the end of the American experiment, democracies, and the climate. We are living in a complicated period where people are now judging art in this way. If the subject matter or the cause of the art is thought to be good, then the art is automatically deemed to be good. And this sells art, the most divine operating system we've ever come up with to embed thought in material. That's pretty advanced. Art will die only when all the problems it was invented to address have been addressed. All art is political.

Is contemporary art just an escapist belief system?
Andy Warhol used colors that have never been put together before in the history of the world. He'd use DayGlo colors and he skidded them like that, those funny little skids. Forget the subject matter, close your eyes and you'll see a revolution. Donald Judd Is a revolutionary art, and he made boring boxes. Because most of how we dress and look, the buildings we live in, the furniture we sit on was changed by these meaningless boxes. So don't be afraid when somebody says, ‘that art doesn't have a meaning’.

What do you think is the main element missing from most contemporary criticism?
If I said that more art is being made, that means that more criticism needs to be used to lift up. Now, if you can ‘lift up’ without speaking, dissertation, that would be good. To not write the way my generation did and try to deal with content in a much more subjective way.

Who is your favorite critic, and who is your least favorite?
I love my wife's work, Roberta Smith. Because she's a Quaker, and she cannot lie. Now try being married to that. I like my old friend Peter Schjeldahl, we argue a lot on the phone. David Rimanelli is wild to read. That's a good list. Least favorite, Dave Hickey used to call me, I never understood a word he said. I used to say, ‘you're not a critic, you're a philosopher, a pirate genius poet. But you don't know **** about the art being made now’.

What is the best and worst thing about being a magazine art critic?
Well, writing is the worst thing. The best thing is, I am so lucky to have a front-row seat during the most extraordinary period we've ever lived through.

What’s your advice to students trying to get into criticism?
I think if you love this life, obsession is everything, and you give yourself to it. If you're going to fail, fail flamboyantly. Don't fail in a mediocre way like most people, then you're just like most people. I'm not asking you to be special, just fail a little. Spread your wings, you know you want this, you should want it so bad you can taste it.

What is the first lesson to learn as an art critic?
You will never be defined by your rejections ever. Most of what we're going to do is fail an awful lot at what we do. The thing about criticism is nobody can say anything worse to you than you haven't said four times to yourself today. I mean, we live with our demons.

What should students remember who wish to sell art and only art?
I am good friends with Marina Abramovic and plenty of art stars. Marina confesses she makes art no-one can see, and yet she’s a multi billionaire, in lifestyle magazines and supported by a gigantic economic structure called the institution. And there's nothing wrong with that. There's nothing wrong with her being supported this way. It's all part of the same ball of wax.

What do you wish you knew when starting out?
It will never be perfect. Finish it.

What would you like the students to remember from today?
Every time I come in contact with a new work of art, and I want you to remember this, it's brand new to me, I've never seen it before. Stay open, keep looking, the language never stops. You can never see too much, hear too much, read too much, do too much, there are no wasted hours. Stay open, keep moving, and have your tentacles out.

You get to have dinner with three artists from any historical period, who are they?
I think that the greatest work I've ever seen were cave paintings in the Spanish Pyrenees. This is the greatest observed art in the world and the first artist. Matthew Barney, because I was the first to write about him. And Hiroshige, the Japanese printmaker who creates masterpieces. I love all of them, but I wouldn't have dinner with them.

Tell us something we might not know about you?
I collect fake paintings. We can’t afford most of them. I have a perfect Damien Hirst dot painting in my living room. It's massive and every time I see it, it's like a Hallmark greeting card. He captured cheeriness.

If I say Sotheby's to you, what's the first words you think?
Auction, money, movement, fast - the big shakers!