Basquiat Bonanza among a Watershed Week for Auctions 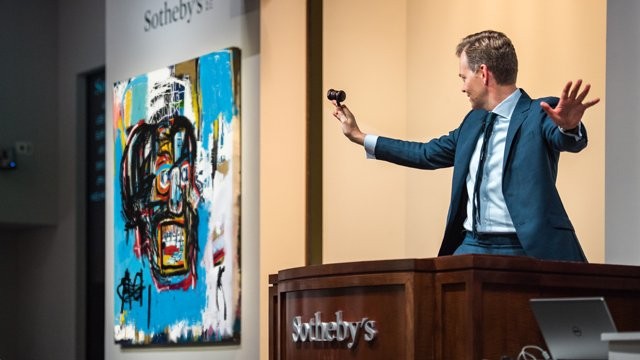 The mid-May auctions from the major houses of Sotheby’s, Christie’s, and Phillips, which together were estimated to auction off more than $1 billion in this one week alone, created a zeitgeist moment for the art market. Per The New York Times, the auctions were expected to test the resilience of the art market in the Trump economy.

On Thursday, May 18, art market history was made as Basquiat’s Untitled, 1982 was sold for a record-breaking $110.5 million at Sotheby’s Contemporary Art Evening sale. The price made this work the highest paid at auction for a work by an American artist and for any artwork created after 1980. It is the sixth most expensive work ever sold at auction and only 10 other works have broken the $100 million mark.

As The New York Times reported, at least four bidders were on the phones and in the room. In the end, the Japanese collector and entrepreneur Yusaku Maezawa was revealed via a post on his Instagram account to be the new owner: “I am happy to announce that I just won this masterpiece,” he said in the post. “When I first encountered this painting, I was struck with so much excitement and gratitude for my love of art. I want to share that experience with as many people as possible.”

Untilted is fated to be exhibited in Maezawa’s planned museum in his hometown, Chiba, Japan. “But before then I wish to loan this piece — which has been unseen by the public for more than 30 years — to institutions and exhibitions around the world,” he said in a statement. “I hope it brings as much joy to others as it does to me, and that this masterpiece by the 21-year-old Basquiat inspires our future generations.” On Twitter, Maezawa posted a picture of himself with the work and says: “I am a lucky man.”

Before the Basquiat bonanza of Untitled, in the Sotheby’s sale, Lichtenstein’s blonde bombshell, Nude Sunbathing from 1995 went for $24m - highest price of the night at that point. Other notable sales included David Hockney’s Gauguin’s Chair, which was a star of the Tate show and sold for $3.8 million and a record for Keith Haring at $6.6 million for his work used as design for an antinuclear poster, breaking the record set in London last year.

Earlier in the week, Brancusi’s 1913 egg-shaped sculpture, La Muse Endormie, went for a new high for the artist at auction. Expected to go for between $25 and $35 million, it sold for $57.4 million at Christie’s.

In the May 18 Sotheby’s Contemporary Art Evening sale alone, live-tweeted by Sotheby’s, there were many watershed moments:

#WorldAuctionRecord Basquiat's seminal 'Untitled' work from 1982 soars to $110.5 million - after 10 minutes of bidding

#AuctionUpdate: Gerhard Richter's 'Untitled (5.4.86)' set a new auction record for a work on paper by the artist selling for $2.2m

#AuctionUpdate: German artist, Wolfgang Tillmans, makes a splash at his evening auction debut in NY - selling for a record $660.5k

Watch the slideshow to learn more about the notable works sold in the Sotheby’s Contemporary Art evening sale.