Bushwick’s Coolest New Gallery and the Women Behind It All 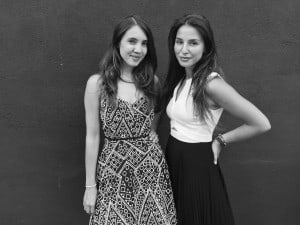 Sotheby’s Institute alumnae Clara Darrason and Jennifer Houdrouge, recently named among Brooklyn’s 100 Influencers, opened an art gallery unlike any other space in New York. The Chimney is a black building, 23 feet in height, in a parking lot in Bushwick. The space gets its name from a curious little chimney that rises from the roof of the gallery, hinting at the interior’s unexpected height. Clara and Jenny talk about working their connections, curating cutting-edge shows, and living in one of the most exciting art scenes in the world.

How did you start out? What did the first year at The Chimney look like?
Clara: The first weekend in June will be the second year of The Chimney. It started during Bushwick Open Studios of 2015 and we showed the work of Andrew Erdos. The building was abandoned, it was sitting in this parking lot, and we happened to see it quite often. We entered the space and we saw that there was no heat or electricity, but it was a really exciting venue to explore and use for curatorial projects. It’s a black box, not a white cube.

You both attended the Sotheby’s Institute of Art, and now you’ve started this incredible gallery together. How does the network you built at Sotheby's Institute play out in your professional career?
Jenny: Clara and I met there, so it shaped the years after [we received our] Masters, not only in terms of us partnering for The Chimney but also with the curators we work with at The Chimney. For example, in September we had Carla Lucini, who is also an SIA alumna, who curated a show at The Chimney. Whenever I go to fairs or visit galleries I always meet people from Sotheby’s Institute and there is a bond that is immediately created.

What initially motivated you to do your MA in Contemporary Art at Sotheby’s?
CD: I had studied poli sci and then I studied business and cultural management, then I worked in France organizing art fairs and curatorial projects, and I’ve always wanted to move to New York. The one year program was quite dense and you get to meet curators, go to galleries, see private collections and travel to China and L.A. It is a rich program where you meet a lot of people and build a strong network that is still helping us. Christine [Kuan], Kathy [Battista], all of these people were instrumental in what we’re doing now.
JH: The Sotheby’s program is great also because there’s a focus on Contemporary Art. A lot of other Masters are specialized on curating or art criticism whereas this Masters combines both practice and theory. You have access to different professions.

Were there any courses or experiences in particular at the Sotheby’s Institute that you’ll remember most?
JH: Stephan Pascher was incredible. He was the teacher in theory class.
CD: I would also say Kathleen Madden was really great because during one of the discussions I had with her about career paths she looked at me and said, “You just have to be a gallerist, you have no choice.” I didn’t know if it would work out, but with a mixture of luck, opportunities, and a lot of work, it actually happened a couple of months after that discussion.

How does the gallery space influence the work you show?
JH: The space is the purpose for a show. The curatorial approach is that we ask artists to work with the space and respond to the environment. Most of the exhibitions are site specific and immersive.
CD: The space has a strong identity in itself which you can’t disregard. It’s not white walls. It’s brick, you can tell there has been a history, and usually what we encourage artists to do is to think of a project they’ve dreamt of doing for a long time and to think with scale. So for the performance today by Autumn Ahn, curated by Anissa Touati, she has installed projections on three of the walls, and she’s using the height of the space as the canvas. When she does her performance she will pull herself up in the air with objects that balance her weight.

What is the creative aesthetic of the gallery? What kind of art objects attract you?
CD: It’s very instinctive, when we see an artist, we know immediately if the other one will like it. It’s not so much a material, although we are very drawn to sculpture, it’s more the sensibility of the artist and how that person can deploy himself with the scale of The Chimney. We’ve been working with a lot of women, it’s not so much a conscious decision.
JD: We had several performances the first year, and last year we launched the first Chimney video and performance festival, so there were several nights with performance and video screenings. Performance artists are quite drawn to the space, probably due to the height. Usually for some exhibitions we try to activate the exhibition and the space in different ways. It’s a nice way to collaborate with other artists, or invite other curators.

What inspires you? How did you develop a passion for art?
CD: I came to art through photography. At a very young age, I was living in Paris and this medium was very important to me. It was the first one I related to. The creative field was always very attractive.
JH: I am very passionate about philosophy, and I think art is the materialization of some philosophical thoughts. I’m incapable of not having art, for me it’s just feeds my perspective. It’s not just about visual content. When you work with artists, you get into a whole world with the artist; in the way he thinks about the world and the way sees it, and I think for Clara and I it’s something that brings us a lot in our personal lives as well.

What has been the most rewarding experience of your career so far?
CD: Starting The Chimney, moving here, finding a network that’s very encouraging, ultimately seeing the space grow and doing this adventure with Jenny. A lot of the artists became friends and we have dinners where we all meet and some of them end up working together. When you’re an artist it’s really important to have this community, to have people that care about you and that you can rely on. It's our little Chimney family and it’s very international.

What’s next?
JH: We have the exhibition program scheduled until January 2018 so far, and we will continue planning the program for the upcoming months. And then we’ll see. We’re very drawn to doing some Chimney off-site exhibitions because we are both from Europe and we have a strong connection to France and Africa so we are thinking about doing some exhibitions abroad.

What is your advice for students interested in studying at the Sotheby’s Institute of Art?
CD: Try to get a lot from your teachers. If you’re a little younger and you’ve just finished college, the teachers have a lot of experience and will be able to orient you and provide you with opportunities so it is a great relationship to have with them.
JH: Keep in touch with all of the people in your class, because they will be your future coworkers or partners, and just nourish these kinds of friendships because they bring beautiful projects.
CD: When you arrive in the art world in New York it can be a little intimidating because you see the big auction houses, the big galleries, and it seems like it’s going to be so much work to get your foot in the door. But if you’re a curator you can start curating in a part of your living room or in a space that you find in Brooklyn, you don’t have to limit yourself to an institution or places that are known. Think literally outside the box. When we saw The Chimney it was just a big building in a parking lot in Bushwick with no electricity or heat and then if you start to have the right ideas for the space and work with the right people then you can make something exciting out of it.