Four Centuries of Art in London 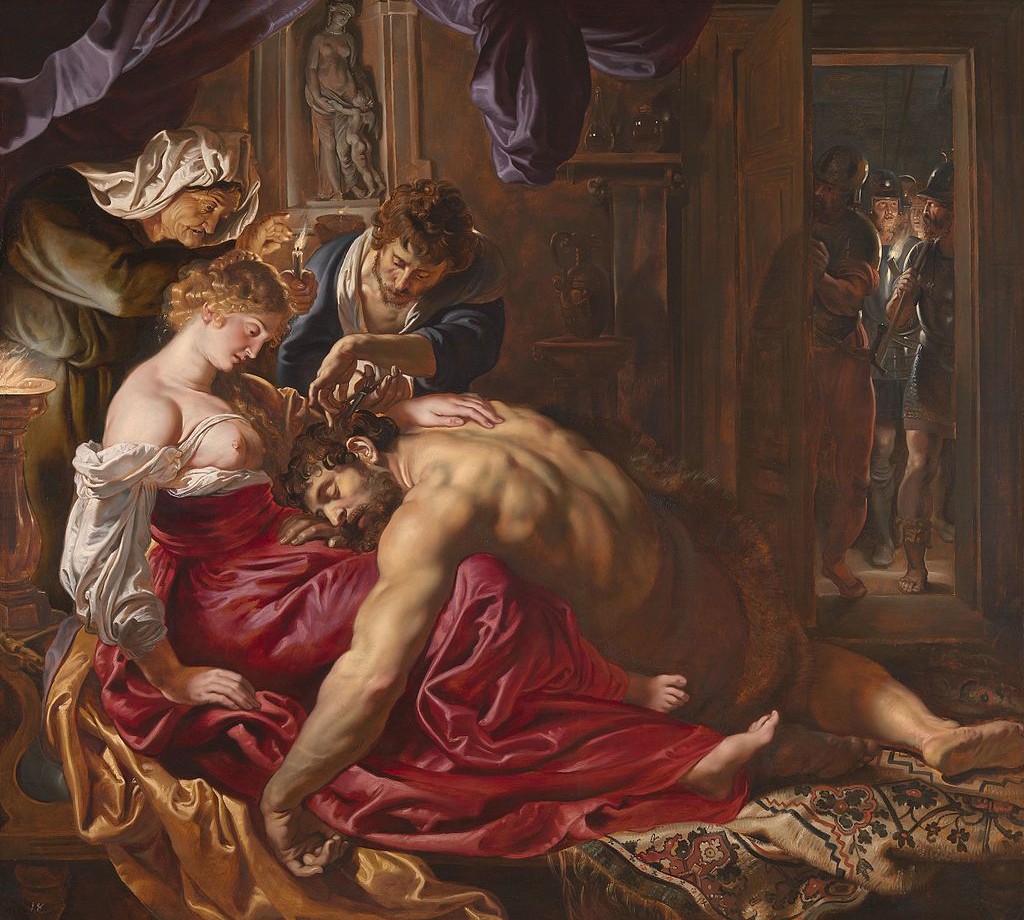 London offers a rich range of art from across the periods of western art history. It is a city of renowned museums, major galleries, and private collections, displaying works from classical antiquity to the contemporary. In her upcoming summer course, Dr. Diana Newall examines four extraordinary centuries in the history of European art. Below, she offers a preview of some of the artwork that may be explored in the London course.

Raphael’s career took him to the centre of the High Renaissance art world in Rome, working for one of the most powerful patrons of the early sixteenth century, Pope Julius II. Producing work across a full range of media—painting, fresco, tapestries—he also consolidated his success through the new media print reproductions of his work. His skill in giving subjects an emotional intensity and powerful presence is fully apparent in this finely-painted image of the Madonna and Christ Child. A popular Christian subject for centuries, Raphael brought a new depth of feeling and humanity to the figures. A sensitive Madonna, dressed in contemporary costume, attends to the playful baby on her lap. The landscape revealed by the window reinforces the sense of a real room in Italy, connecting it intimately with the sixteen-century worshipper. Although it’s authenticity was challenged in the past, x-rays revealed evidence of the master’s changed brushstrokes—pentimenti—confirming its place at the centre of the National Gallery’s Renaissance collection. 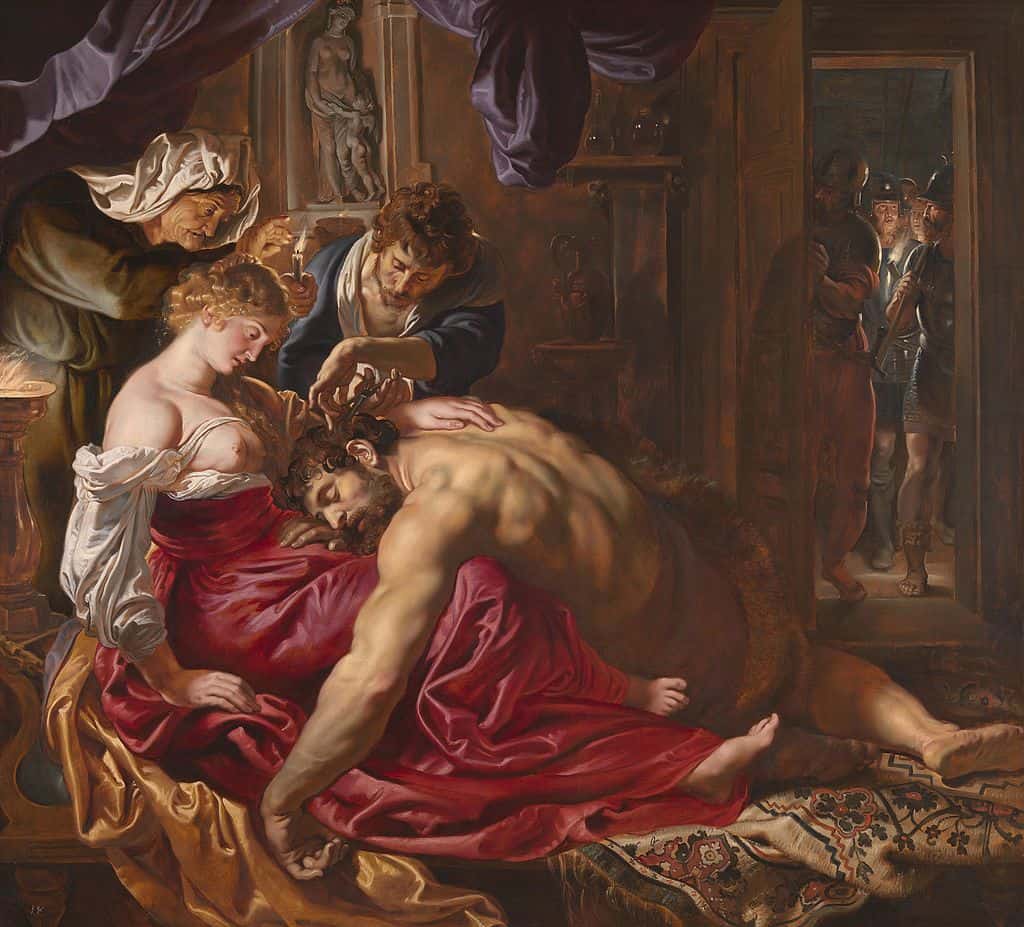 Rubens was a highly successful seventeenth-century Baroque artist and as a diplomat, played an important role in international relations for the southern Netherlands. He had a large workshop and studio in Antwerp handling numerous commissions, but he also worked for the courts of England, France and Spain. This painting of Samson and Delilah, tells the story of the Old Testament hero, who, deceived by his wife, has his power-giving long hair cut short. The scene shows the mighty muscled hero sleeping in his lover’s lap as her attendant checks he is comatose and his attackers approach through the open door. Delilah is portrayed as a curvaceous rosy seductress in a rich velvet robe. Rubens’ strong contrasts, colors and textured surfaces give drama whilst the use of highlights focus on the action and adds a sinister threat to events. This work demonstrates the power of Rubens' skill and explains his popularity and prolific success across Europe. 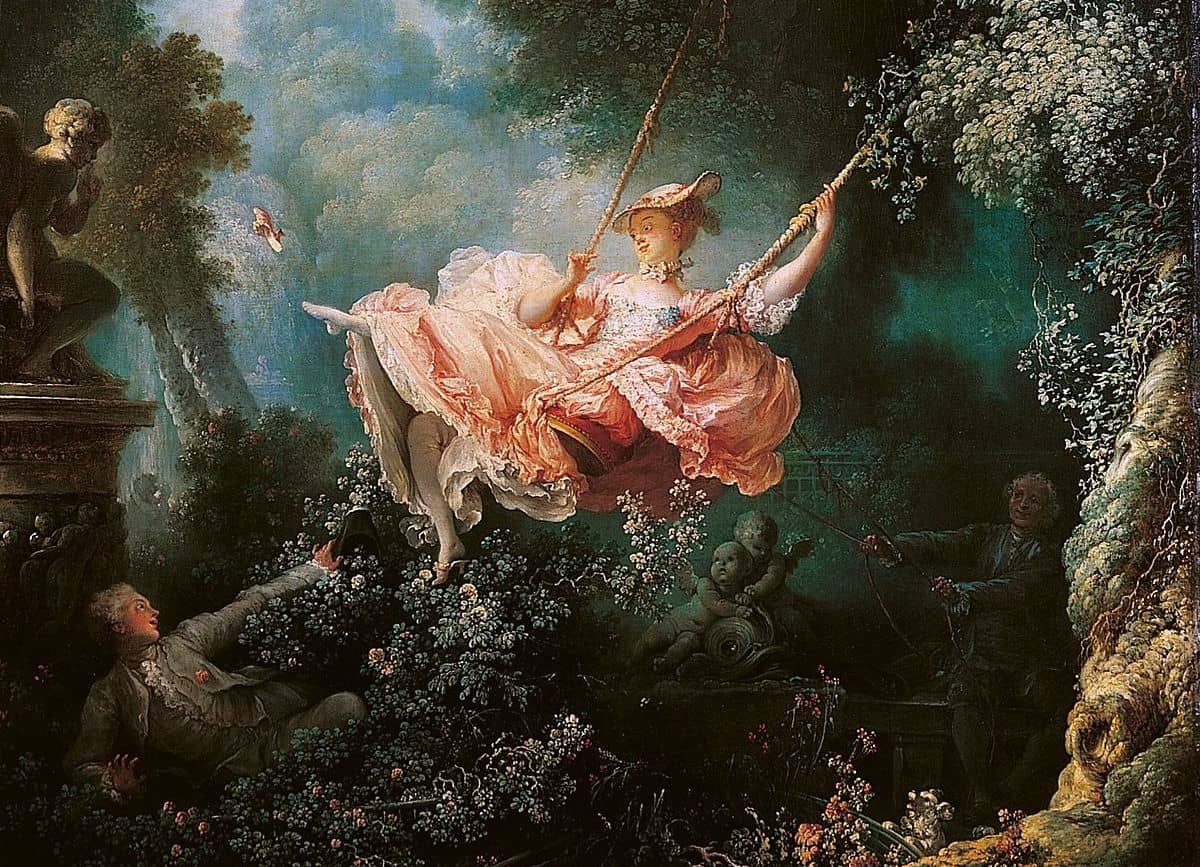 The eighteenth century French court of Louis XV developed a taste for pastoral scenes of love and amorous encounters. Characterized by soft curves, floral details, pale pastels and often voluptuous nudes, the Rococo style had less drama than the Baroque delivering instead a soft seductive sensuality of secret trysts and bathing goddesses. As a late Rococo artist, Fragonard painted scenes of love, mild eroticism, pastoral landscapes and sensitive portraits. The Swing presents a humorous elicit love scene set in a lush garden. The lady in peach silk on the swing, swung by her husband, frivolously kicks up her shoe to reveal her undergarments to her lover hiding in the bushes beneath. Statues of cupid look on in consternation, one touching a finger to their lips to keep the affair secret. Painting at the end of the Rococo period, Fragonard’s work was soon to be superseded by the austere power of the Neoclassical. 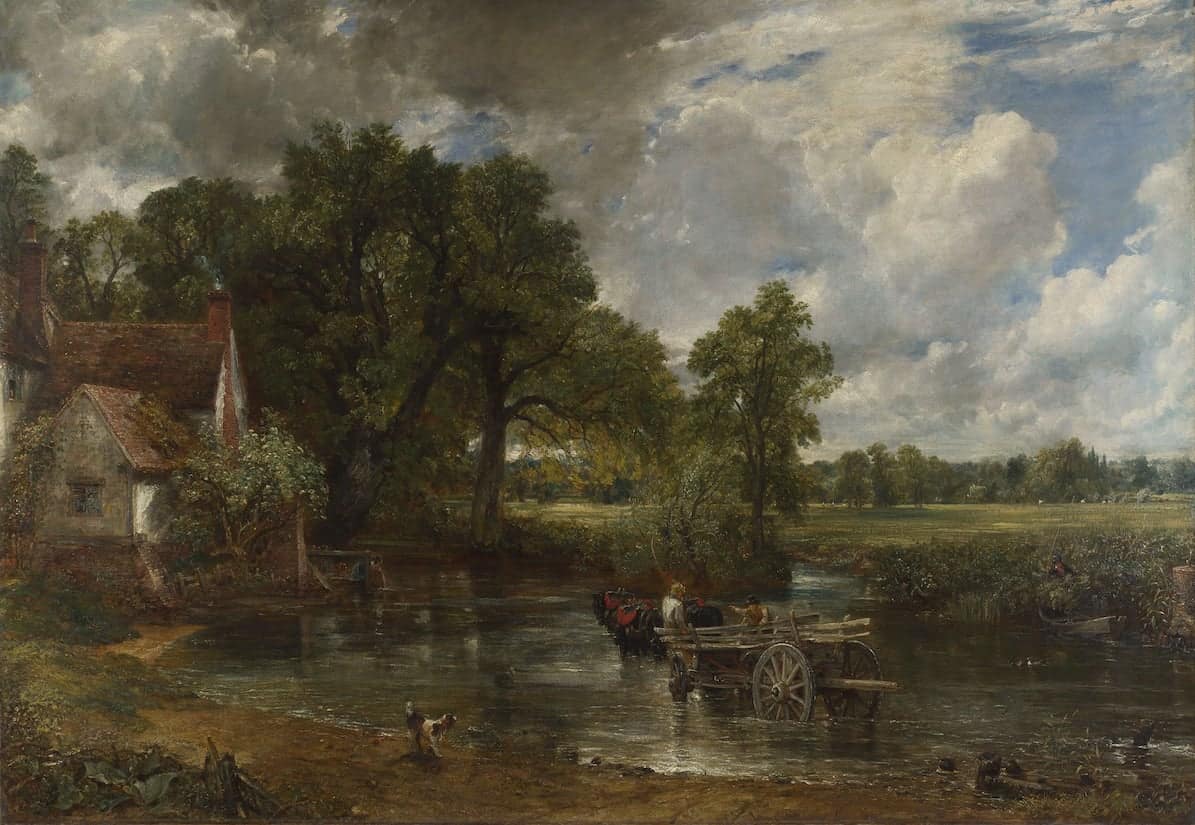 Landscape painting was traditionally of low esteem in the art Academies, who prioritized scenes of people and subjects with high values and moral messages. Against the context of rising industrial and urban development in Britain, Constable’s landscapes presented a Romanticized harmonious rural world. He painted many scenes around his home in Suffolk, The Hay Wain perhaps one of the most famous. A deceptively simple scene shows a horse cart pausing in a river crossing, near a mill with a dog in the foreground and fields stretching towards distant trees. Constable refined the balancing details through many compositional versions and sketched thousands of sky and cloud details to perfect the scudding English weather. Highlights on the river, man, mill and dog link to the bright clouds, reinforcing the idyllic image of man at one with nature. Displayed in Paris in 1824, this work provided a significant influence on the next generation of French landscape artists leading to the Impressionists. 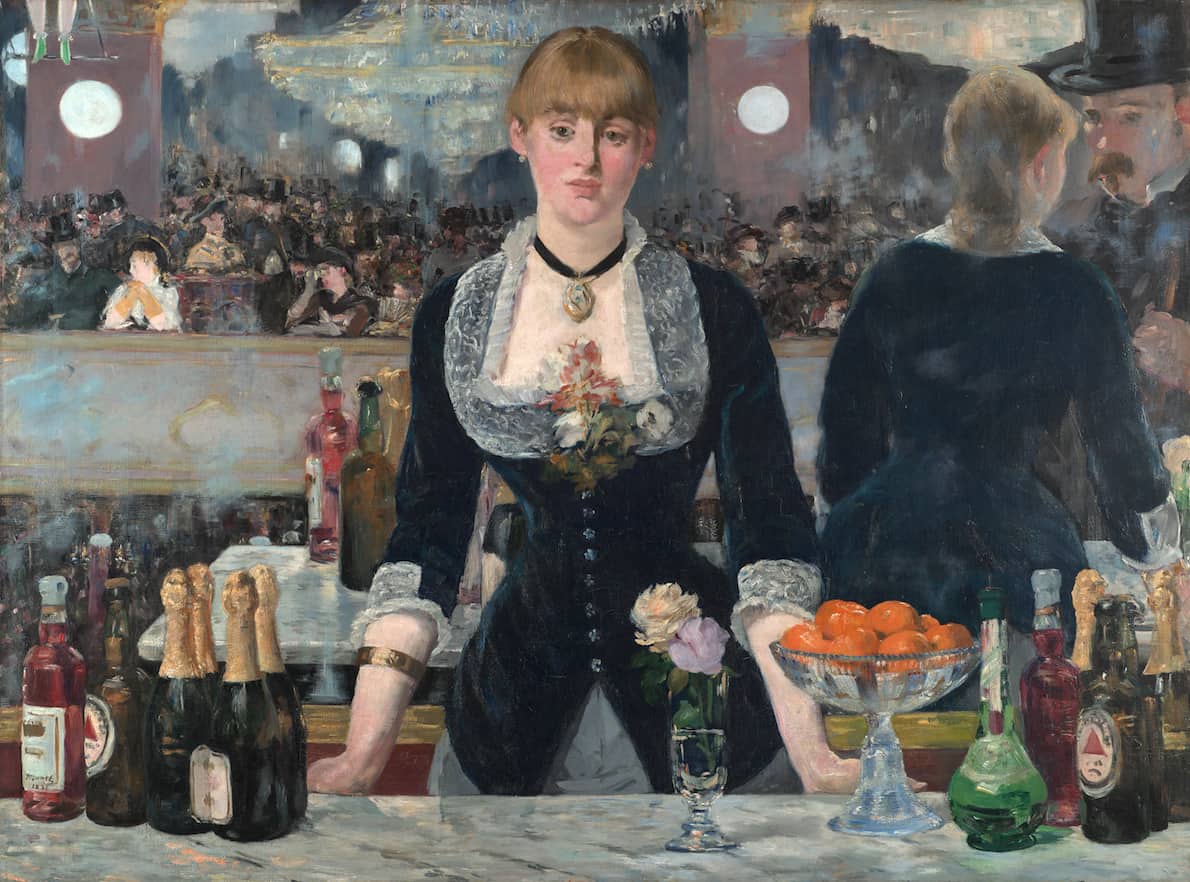 Édouard Manet's The Bar at the Folies-Bergère, 1882 (Courtauld Gallery)

Titled the father of the Impressionists, Manet is also considered to be one of the first modern painters. Concerned with the contemporary world of Paris, Manet captured everyday scenes to recreate a new classical visual language. Using strong tonal contrasts and almost flat areas of paint, seen here in the woman’s dress, he emphasized the presence of the artist’s hand. One of his last works, The Bar at the Folies-Bergère centers on the barmaid Suzon, who offers drinks and pleasures at the bar in front of a mirror, reflecting fashionable clientele at leisure. Waitresses were known to offer themselves for sale and reflected in the mirror is a top-hatted male client perhaps asking for favor. There is a mis-alignment in the reflection which implicates the viewer as the client, challenging this seedy side of Parisian society. Manet received critical scorn for many works during his lifetime but his original style and challenging subject matter has left a great legacy in western art history.

Strengthen your art history knowledge with our Summer courses in New York and London.