From Subway to Studio: How Street Artist Daze Went from Breaking the Rules to Making Them Legend

Home News & Events From Subway to Studio: How Street Artist Daze Went from Breaking the Rules to Making Them Legend

Renowned street artist Chris “Daze” Ellis may not be the troublemaker he used to be, but he’s still making his mark all over New York City’s concrete canvases. Now he just has permission. Daze shared the beginnings of his career in the infamous 1980s New York City scene and his evolution from painting subway cars to exhibiting in galleries in an exclusive artist talk at Sotheby’s Institute of Art. In a conversation with Kathy Battista, program director for the Contemporary Art Masters degree in New York, Daze revealed stories from the streets, admitted to late nights with then-unknown fellow artists such as Keith Haring, and inspired the audience with his recent work with students. 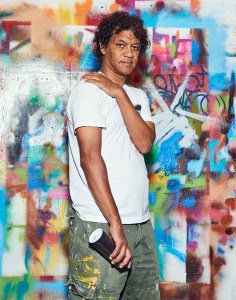 A young Chris “Daze” Ellis growing up in 1970s Brooklyn didn’t need to go to a museum for artistic inspiration. New York City was its own work of art, and the teenager studied it with unstoppable passion. The eye-popping graphics splattered on subway cars first sparked the young artist’s creative flare. Daze recalled being both confused and enchanted by the colorful, cryptic messages and blown-up imagery plastered on trains that hauled commuters all throughout the city. “I didn’t know if it was art,” Daze remembers, “but I knew it was creative.” The artistic impulse memorialized on the city’s machinery resonated with the young Chris Ellis. He had found his first canvas.

Daze soon found partners at the High School of Art and Design and spent the next decade practicing his craft in collaboration with other artists. The talented vandals - as they were considered then - were not motivated to make art.  They were motivated to create: “There was a creative engine that was driving people to continue to develop and to evolve and to push the limits of what was happening,” Daze explains. Early on, Daze worked with an artist known as “Repel.” The pair conquered blank subway cars together, armed with cans of paint, ready to take direction from each other’s energy. Daze compares this collective artistic method to music: “One of the things that this whole culture taught me was how to improvise on the spot; you come with your idea and you develop it as it’s happening, like jazz music.”

Daze’s swirling subway creations began to spill onto the city’s unadorned walls. Along with another partner, “Crash,” and other artists, Daze created “outlaw installations” in old handball courts and abandoned buildings. The gang of creative bandits sourced any surface they could find, and developed an artistic movement completely independent from any institution. Daze describes the “renegade culture that was developing without any kind of support, it was very much do-it-yourself.” Once the artists caught the welcome attention of local communities, they decided it was time to take their craft one step further.

“One of the things that this whole culture taught me was how to improvise on the spot; you come with your idea and you develop it as it’s happening, like jazz music.”

For Daze, this meant applying his alternative method to a traditional medium. He began to work on canvas, downsizing his works to explore more personal, intimate themes. “My work became more representational and more figurative, reflecting the environment that I came out of. I felt that I could express myself deeper.” Daze’s paintings feature dreamy imagery fused with urban landscapes. These new themes reflect a thoughtful, reflecting artist at a turning point in his career.

As his network grew, Daze began to socialize with artists who frequented New York’s notorious nightclub scene. Daze pulled up an old photo of himself with Keith Haring at the Roxy Hotel. “The club scene was important to all of this, artists would gather and trade information,” he remembers. Haring worked at The Mudd Club in the early eighties, and helped produce one of Daze’s first exhibitions where he displayed works next to Jean-Michel Basquiat.

Most recently, Daze has been interested in inspiring young students to create and collaborate just as he first did in the mid seventies. His interest in mentorship was unexpected: “My work with kids and students is not something I planned on happening. At first it was an opportunity, then I realized that it was something I was good at.” Daze goes to underdeveloped parts of the world like the favelas in Rio de Janeiro or underserved neighborhoods in Baton Rouge to teach workshops and encourage learning through drawing and painting. “I’m not using kids as my assistants; I’m trying to bring out their own creativity in what they do.”

Daze remarks that one of his proudest collaborative projects is his most recent workshop with students on a mural in Coney Island. The group of artists painted a whirling sea monster flanked by imaginative scenes inspired by Coney Island. The audience awes as Daze pulls up a photograph of the fantastic mural. Personified hot dogs stampede toward the viewer. A fashion show takes part in a dreamy underwater scene. Daze’s mentorship style is similar to the “do-it-yourself” attitude he adopted from his early work on the streets: “I encourage students to look at me as a door that they can walk through and come out with experience.” The renegade artistic culture of New York in the late 20th century may be long gone and safely institutionalized, but veterans like Daze still encourage the next generation to find new ways to break the rules.