Home Gyms, According to Modernist Icons 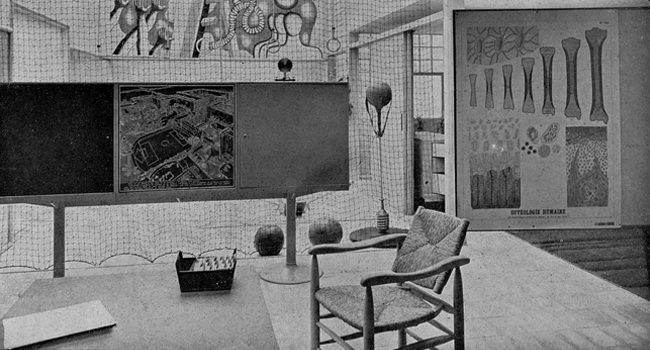 Graduate faculty Bernard Vere examines the home gym as imagined by mid-century modernist greats Le Corbusier, Charlotte Perriand, Fernand Léger, and René Herbst for a 1935 exhibition. Here is an extract of the essay, originally published in Sport and the European Avant-Garde, 1900–1945.

Bernard Vere’s latest publication, ‘After Purism: The Young Man’s Home at the 1935 Brussels Exhibition’, looks at a collaboration between four stars of the inter-war avant-garde, Le Corbusier, Charlotte Perriand, Fernand Léger and René Herbst. The team worked on a fictional Young Man’s Home for an exhibition in Belgium in 1935. Most of the space was given over to the Young Man’s office and, unusually for the time, his home gymnasium. With home exercise often occupying our minds, if not always our bodies, over the past couple of years, we reproduce part of Bernard’s essay here:

Alongside the central rowing machine, were Herbst’s Sandow metal chairs, named for the strongman and physical culturalist Eugene Sandow and drawing on elements of a chest expander for its seat and back. There were also Indian clubs, medicine balls, a punchbag with boxing gloves, and weights. Suspended from the ceiling are a trapeze, climbing ropes and gymnastic rings. And no other gym had a monumental work by Léger against its back wall. That Léger shared many of Le Corbusier’s views of importance of leisure is evidenced by an essay he wrote for Art Front in 1937: ‘I should like to say a word as to leisure–the creation and organization of leisure for workers. That, I take it, is the cardinal point of this discussion. Everything depends on it’. There he lauded ‘Le Corbusier’s two great gifts to us: the white wall and light’, while advocating ‘mural paintings signed by the best modern artists’, an art that competes with (but also learns from) ‘the daily allurements of the movies, the radio, large-scale photography and advertising’.

[…]Rather than the sterile, disciplined space that Romy Golan’s identification of its ‘washable linoleum walls’ implies, the gym in fact was often contrasted to the office. For contemporary commentators, it was the office (and not the gym), that exemplified a ‘sober rationalism, hygienic and even spartan’ (Cheronnet) and which was governed by an ‘imperturbable logic [that] removes any idea of luxury and even elegance’ (Champigneulle). By contrast, for these conservative critics, the gym area is noted by Cheronnet for its ‘fresh oppositions of blue and yellow’ and is described by Champigneulle as in Herbst’s signature style ‘with all its notes of living colour and its reflective burnished metal’. Léger’s painting, dominating the far wall, obviously contributed to this sense of liveliness. As a whole, the gym had much more in common with Herbst’s designs for a stainless-steel first-class cabin on a steamship, a luxury space with vivid red furniture, Sandow chairs and Vuitton luggage, than it did with a sterile environment such as a hospital.

The side view of the gym establishes that this is no mere utilitarian space for training the body. Rather, it is better regarded as an environment in which such training could, but not necessarily would, take place. Herbst’s Sandow chairs reinforce this. In themselves they do nothing to train the body, but they adopt the rhetoric of physical training. His chaise longue, with a robe and a chest expander draped across it, does even less to convince the viewer that physical training is paramount here. Next to it is placed a portable set of shelves on which two magazines are folded. There is just enough visible in the photograph to establish the titles: L’Auto and Match L’Intran. These were the two leading French sports publications, with L’Auto alone selling up to 300,000 copies a day at the time. Accordingly, these magazines, while promoting sport and physical culture, also made celebrities of the leading sporting figures of the day, particularly cyclists and boxers. To pick up a copy of L’Auto or Match L’Intran is to engage with sport in a very different manner, then, to picking up the boxing gloves and training at the punchbag, but this is a use of the space that the gym also seems to encourage. It is, in fact, easy to imagine the Young Man on his recliner, leafing through the popular sporting press and procrastinating not only about moving to the punchbag or the rings, but also about the work that awaits him in his office, subverting not one but both of the major spaces of the display.

Taken from Sport and the European Avant-Garde, 1900–1945, edited by Przemysłav Strożek and Andreas Kramer (Leiden and Boston: Brill, 2022)

Learn more about our MA Programs in London and New York.