How to Expose the Art World: A Lesson from the Guerrilla Girls

Home News & Events How to Expose the Art World: A Lesson from the Guerrilla Girls 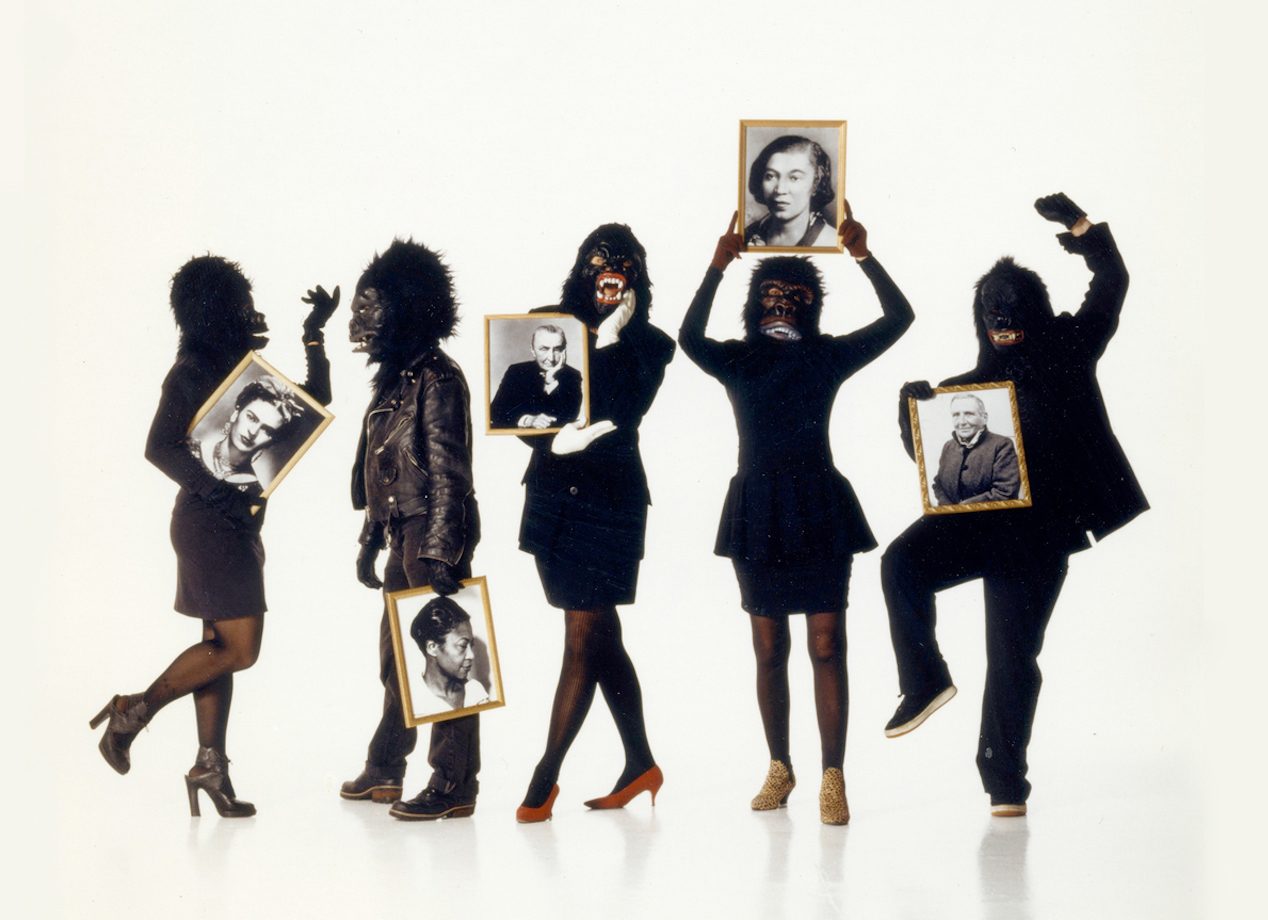 Since 1985 the Guerrilla Girls have been continuously and courageously exposing the biases and corruption within the art world and beyond. But instead of being alienated by the industry they criticize, their work has been welcomed by major museums, galleries, art fairs, and biennials, including the Tate Modern, Art Basel Hong Kong, and the Venice Biennale. So, how did the Guerrilla Girls develop their distinctive form of artistic activism and manage to capture the attention of an international audience? In a special edition of the “Sotheby’s Institute Speaker Series,” held at Sotheby’s New York, a gorilla mask-wearing founding member of the collective — who goes by the name, Käthe Kollwitz* — gave a lesson on how to expose the art world and succeed. 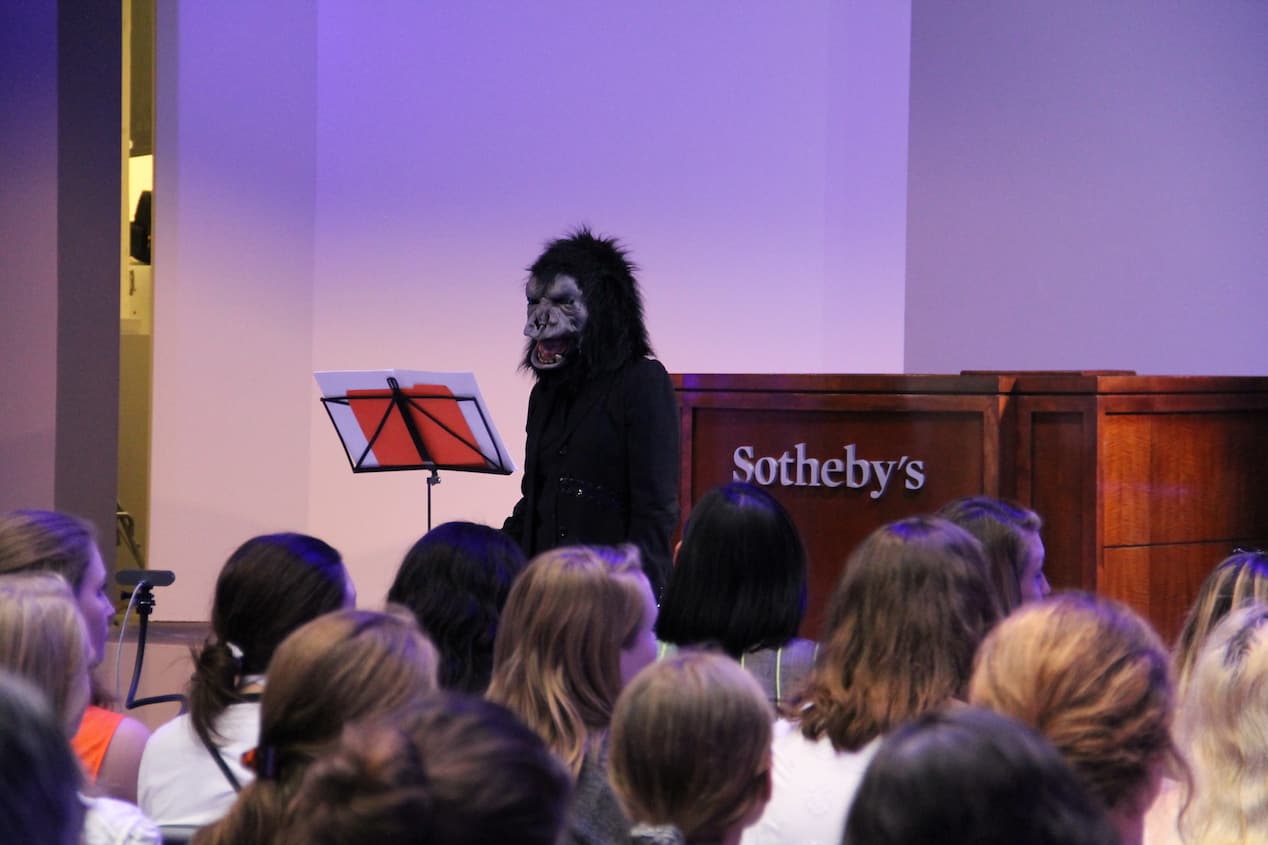 “Imagine you’re an artist, pissed off that almost all the opportunities in the art world go to white men,” Käthe Kollwitz begins, looking out through her guerilla mask into a filled Sotheby’s auction house auditorium. “Imagine you go to a protest outside the Museum of Modern Art after it opens – an international exhibition with 169 artists, only 13 women, and 8 artists of color.” Standing with fellow protestors along the picket line, Kollwitz realized that there had to be a better, more effective way to gain the attention of passive museumgoers. An in your face, unforgettable way “to break through people’s preconceptions and prove to them that the art system is not a meritocracy” became the goal. And that’s when the Guerrilla Girls form of activism was born. A group of 60 individuals formed the group, opting to remain anonymous — to preserve their careers and allow the issues they were illuminating to take center stage — taking on names of dead, female artists instead. They pooled their resources and started to create work about racism, sexism, and corruption. Hundreds of posters, billboards, street banners, books, performances, workshops, videos, and exhibitions were produced, exposing the biases not just in the art world, but also in film, politics, and pop culture.

Guerrilla Girls, Do Women Have To Be Naked To Get Into the Met. Museum? (1989)

“As we’ve learned early on, if you can make someone who disagreed with you laugh, then you have a hook inside their brain,” Kollwitz offers. “Once you’re in there, you just might change their minds about things.” For this reason, humor has become the hallmark of the Guerrilla Girls’ approach. A case in point is what they call, “the weenie count” – a survey conducted in the Metropolitan Museum of Art, calling attention to the gender disparity in the museum’s 19th and 20th century art sections, where less than five percent of the artists on display are women and 85 percent of the nudes are female. The findings became the basis of the 1989 poster, Do Women Have to Be Naked to get into the Met Museum? with the question and the facts taking center stage, alongside an appropriated image of a Jean-Auguste-Dominique Ingres female nude, wearing a gorilla mask.

In 2005, when they were invited to participate in the Venice Art Biennale, the Guerrilla Girls did some research and made a discovery in the city’s museums: almost all of the collections included the work of female artists — but instead of being displayed on museum walls, it was kept out of sight, locked in the basements. The Guerrilla Girls’ response? A poster with the image of Marcello Mastroianni straddling the character of Anita Ekberg from Fellini’s La Dolce Vita, posing the question, “Where are the women artists of Venice?” And the answer: “Underneath the men.” The work instructed viewers “to go to the museums of Venice and demand to see more women on top,” says Kollwitz.

Image via the Guerrilla Girls

“Don't let museums reduce art to the small number of artists who have won a popularity contest among big-time dealers, curators, and collectors.” Make sure — the Guerrilla Girls instruct — that museums show the full diversity of the art world, the full span of art history. Otherwise, they will continue to protect the wealth and power of the chosen few. How does one do this? Use the Guerrilla Girls’ advice:

Be a loser. “The world of art doesn’t have to be an Olympics, where few win and everyone else is forgotten.” It is not just about raging egos, competition, fame, and fortune. It’s also about cooperation and collaboration. Join forces with others and make trouble together.

Be crazy. Don’t just point out what is wrong. Aim to get the attention of the unconverted — find an unforgettable way to charm the disbelievers and change their minds.

Be an outsider. Seek out what’s lurking behind the curtain — find the overlooked, the subtext, the hidden facts, and expose them. And don’t worry if you don't get it right the first time. Keep going — your efforts will eventually pay off.

Write your own art history. Expose what is missing in museums and in the history of art created and taught by corrupt institutions. Remind people that art is not just about one white male genius after another. Don’t be afraid to complain, criticize, and — above all — change the system.

*All Guerilla Girls members use names of late women artists to keep their identity secret and the focus on their message. Käthe Kollwitz was a German Expressionist artist who lived between 1867 – 1945. Kollwitz was the first woman elected to the Prussian Academy of Arts who also received the honorary professor status.

Featured image: via the Guerilla Girls

Go behind the scenes of the art world with our Master's programs. Learn more.