In Good Company: A Guide to the Neighborhood

Home News & Events In Good Company: A Guide to the Neighborhood 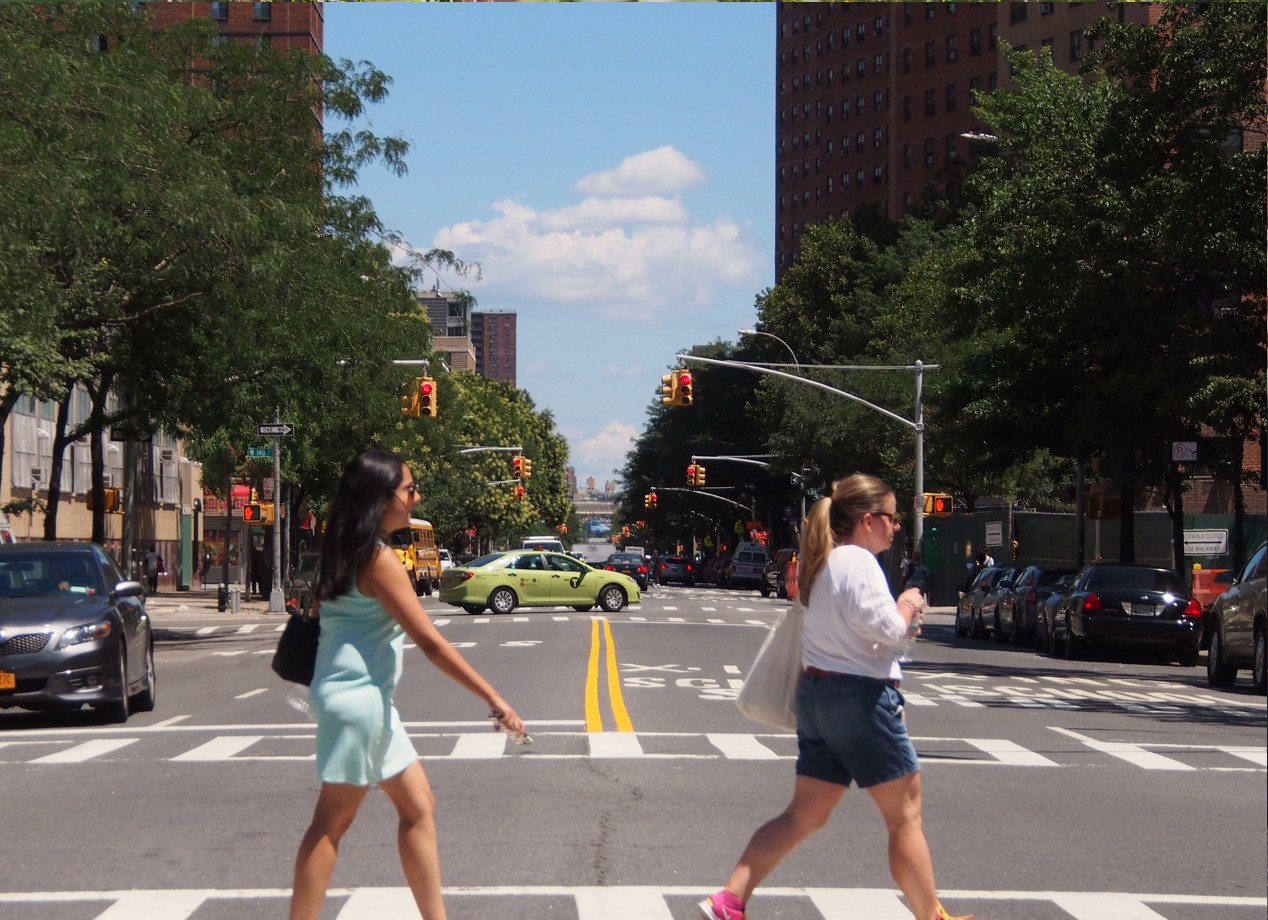 A tour of the Art Deco, Modernist, and Postmodernist gems all hidden in plain view within several blocks of Sotheby's Institute of Art-New York.

Located in the center of Manhattan, the Institute’s New York campus offers easy access to the city’s extraordinary cultural and historical resources. First-hand encounters with artwork, exhibition spaces, and the people who run them are an integral part of the learning experience and a key aspect of the MA programs in New York City. Here, former Summer Institute student, Mara Danila highlighted some of the sights of the neighborhood.

The entrance to 570 Lexington Ave

570 Lexington Avenue (home of Sotheby’s Institute of Art) is a gleaming example of the Art Deco style. It's also full of tiny hidden gems. The building's main entrance is a clock with the logo of the building’s former owner (General Electric) and a pair of disembodied silver arms holding bolts of electricity. Be sure to walk a few blocks north of the building and turn back to see its crown of electric waves.

To the south of campus, you can spot the Chrysler Building, one of the most iconic examples of Art Deco. Its steel gargoyles depicting American eagles staring over the city. The Chrysler Building is not open to the public, but you can visit its luxurious African marble lobby and take a peek at the intricate woodwork on the elevator doors. 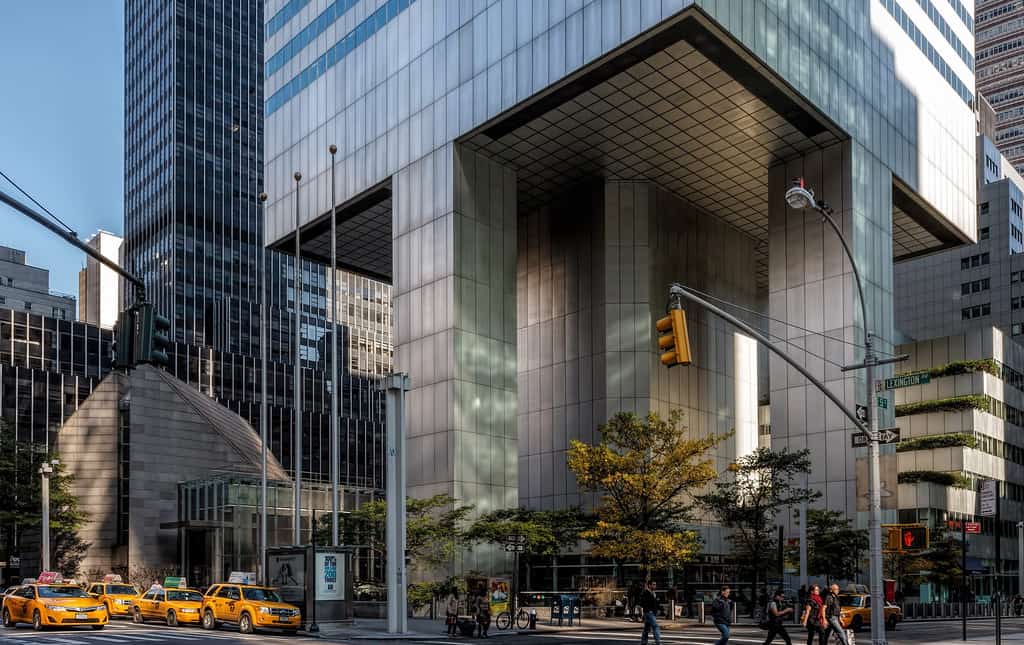 Citicorp Center; St. Peter’s Church can be seen in the left corner

Moving north towards 53rd Street, Citicorp Center seems to hover above Lexington Avenue. This illusion is due to the fact that the first nine stories (out of its total of 59) are just four gigantic stilts upon which the entire structure sits. This design was chosen to accommodate St. Peter’s Church on the corner of the block. Unfortunately, this ingenious solution left room for a rather dangerous engineering flaw, which was later fixed secretly while the building was already in use.

St. Peter’s Church is the only permanent installation of a Louise Nevelson building structure in New York City. Inside, her signature white-painted wooden sculptures, along with works by Kiki Smith and Dale Chihuly attest to the Church's devotion to the arts. 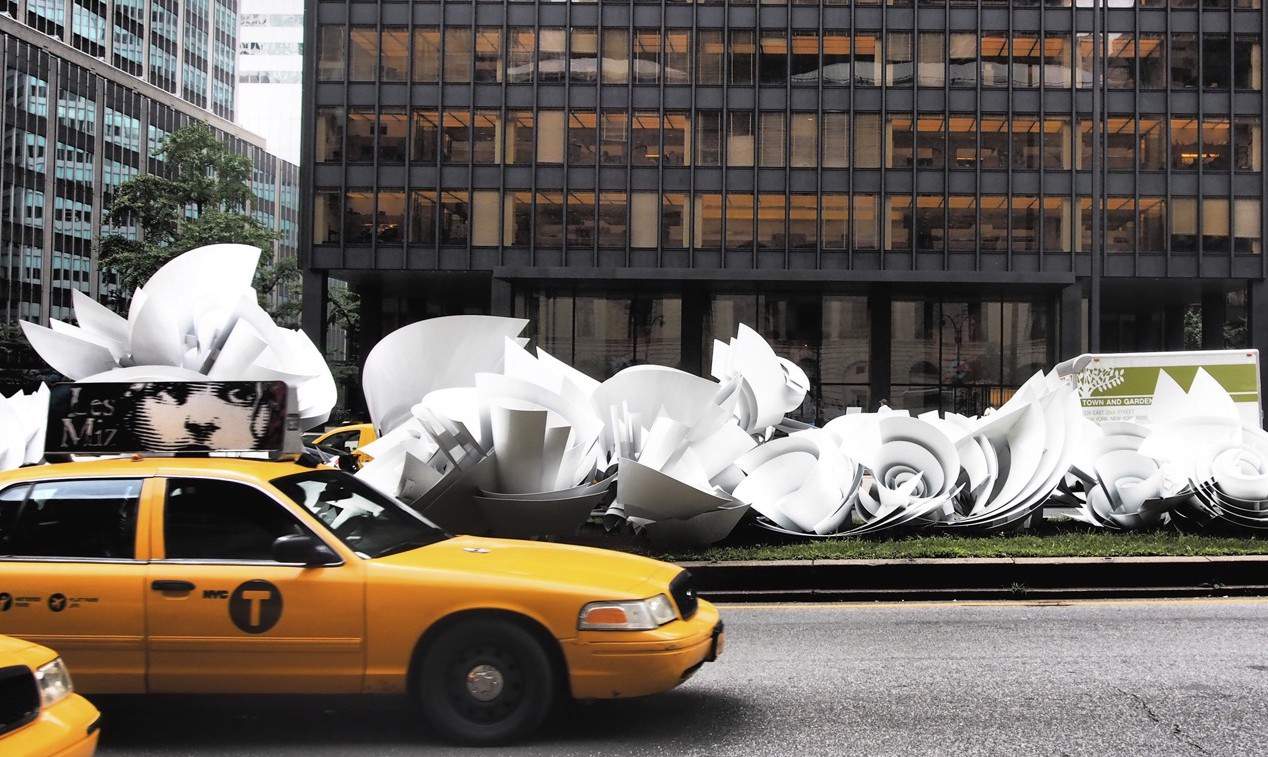 On this block, we find the epitome of elegance and modernism: The Seagram Building. Designed by Mies van der Rohe, The Seagram was avant-garde in many ways: it is generously set back 100 feet from the street edge, creating an open plaza for the public. Mies also wanted to expose the building’s structural elements and make them visible to all. However, building codes required that all structural steel to be covered in fireproof material. Faithful to his vision, Mies decided instead to suggest the structure, using non-structural bronze-toned beams. Meticulous attention was paid to every detail of the building's design. Even the Venetian blinds were custom-made for the expansive windows and can only be set in a limited number of positions so as to provide visual consistency from the outside.

Park Avenue Malls: the pedestrian malls running the length of Park Avenue from Midtown to the Upper East Side double as an open-air art gallery, featuring presentations of sculptures by some the most renowned contemporary artists. The space has exhibited work by artists such as Robert Indiana, Alice Aycock, and Lluis Lleó, who gave a talk about his work to Summer Study students in 2017.

Just across Park Avenue from The Seagram building, The Lever House is a glass-box skyscraper built in the International Style. It was also the second curtain wall skyscraper in New York City after the United Nations Building. The construction of Lever House marked a transition point for Park Avenue in Midtown, changing from a boulevard of brickwork apartment buildings to one of glass towers as more corporations began to adopt the International Style for their new headquarters. 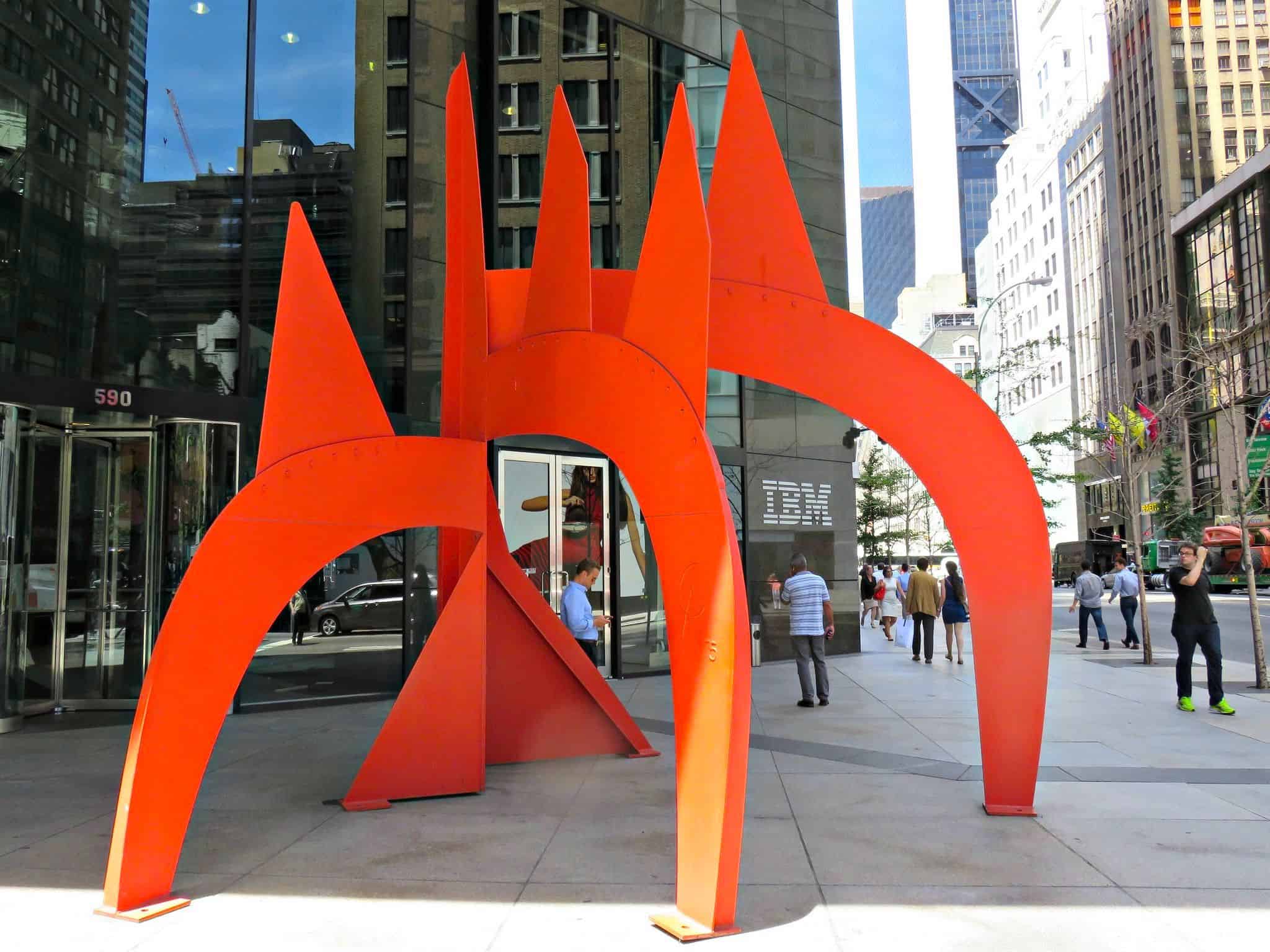 Further north at 41 East 57th Street on the corner of Madison Avenue is the Fuller Building, another example of Art Deco style. The structure has a three-part scheme: a black, granite lower section with shops and a gallery space; a middle section with a showroom space marked by a horizontal window banding; and, finally, office space in a square tower with a geometric pattern in black, glazed terra cotta.

Across the street, at the corner of East 57th Street and Madison Avenue, you’ll see the IBM Building with its unique wedge shape. Its atrium is open to the public and often used for art displays and cultural events.

Under the eaves of the IBM building is Alexander Calder’s Saurien. The bright, orange sculpture from 1975 contrasts spectacularly with the building's grey glass and beautifully commands the uniquely shaped space. For those curious about the name, “saurian” (saurien in French) is a generic term for reptiles, including lizards and dinosaurs.

550 Madison (formerly the Sony Building) designed by architect Philip Johnson immediately became controversial for its ornamental top (sometimes mockingly called the "Chippendale,” after the famous English cabinet maker). Despite its top, 550 Madison is admired for its spectacular seven-stories-tall arched entrance way. With these ornamental additions, the building challenged architectural modernism's demand for austere functionalism. As a result, it became an example of the postmodern architectural movement worldwide.

At the time of its completion in 1931, the Waldorf Astoria was the largest hotel in the world. It boasts 1,400 rooms, several lounges and ballrooms, and occupies an entire city block. The presidential suite on the 35th floor has been the traditional accommodation of the President of the United States while in New York City. The hotel is currently undergoing a massive renovation process, which started in 2017 and is expected to be completed in 2020.

Heading back towards the school on Park Avenue, you will pass St. Bartholomew’s Church, which was built in 1902 in an eclectic, simplified Byzantine style. Once inside, look up and you will be greeted by five Art Deco mosaic domes created using 24-karat gold leaf and glass. Try counting. There are several hundred different shades of gold in these works.

Explore the neighborhood in person with our programs in New York City.