On That Faithful Day 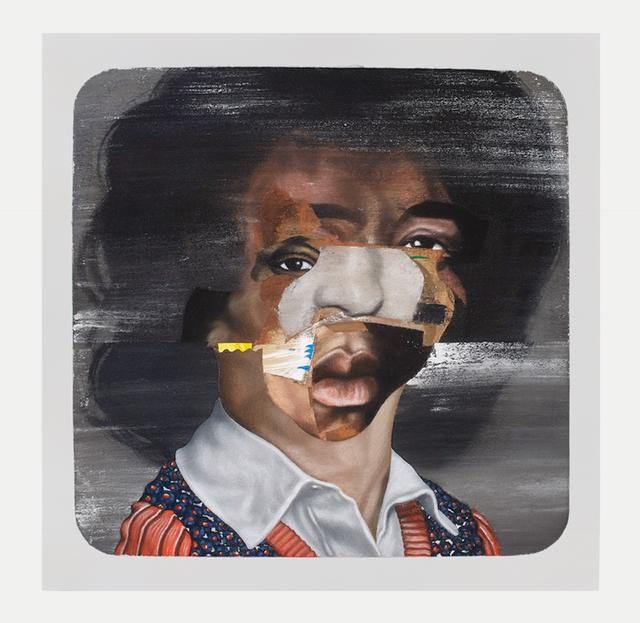 Curating a show with a living artist is like being an accomplice. On That Faithful Day with Nathaniel Mary Quinn at Half Gallery resulted from hours of conversations I had with Quinn, often with my students, talking through ideas and cultural realities. Since 2013, when I first met Quinn I’ve taken perhaps ten groups to his studio and he has done artist’s talks in my classroom. One student lingered after a studio visit with Quinn for at least an hour more as he is a generous and captivating personality. I’m honored and delighted to have introduced him to Half Gallery and for us to work together realizing the show in the domestically scaled, former apartment the gallery occupies. The non-“White Cube” space emphasizes the show’s edgy installation.

Quinn made ten paintings, all portraits of his mother and four self-portraits as well as one sculpture, each reflects his residual memories of traumatic and meaningful events in his life. A sense of abandonment is made clear through old clothes loosely strewn around the gallery in various discarded states. This immersive part of the exhibition, along with a recording of Al Green singing “How Can You Mend a Broken Heart” reflects on a specific moment in Quinn’s life, when a month or so after his mother died, he returned home to the Robert Taylor Homes on the South Side of Chicago to discover his father and brothers were gone. At fifteen he was alone without a family. Before her death his mother had protected and encouraged Quinn who was focused on “success as tall as the Sears Tower,” reflecting his aspirations despite growing up in the notoriously dangerous projects, where many boys his age were gunned down. The show is an ode to Quinn’s mother, dedicated to the sacrifices she made for him.

Quinn survived his abandonment by focusing on academic studies and eventually graduated on full-scholarship with an MFA. His working style is collage aesthetics. Many people see his work on a screen and immediately assume it is cutout pieces forming a collage, however, Quinn is a great mark maker, who uses skill to meticulously realize fragmented amalgamations of drawn and painted anthropomorphic portraits. Many characteristics are sampled and inspired by mass-media images he culls from magazines and newspapers. Ultimately Quinn achieves a harmonious balance, despite the fractured sutures of what might appear to be distressed and anxious characters, isolated shapes, such as noses, eyes, mouths, are rendered in figurative abstraction, many of these portrait subjects sport amazing street styles and the attitude for survival. Quinn’s high level of empathy is on display, revealing a rich and intense internalized world from where he navigates life.

‘Art Derives From Everything in Life’: A Talk with Nathaniel Mary Quinn | ArtNews