Star Auctions: What David Bowie Can Teach Us About Collecting

Home News & Events Star Auctions: What David Bowie Can Teach Us About Collecting 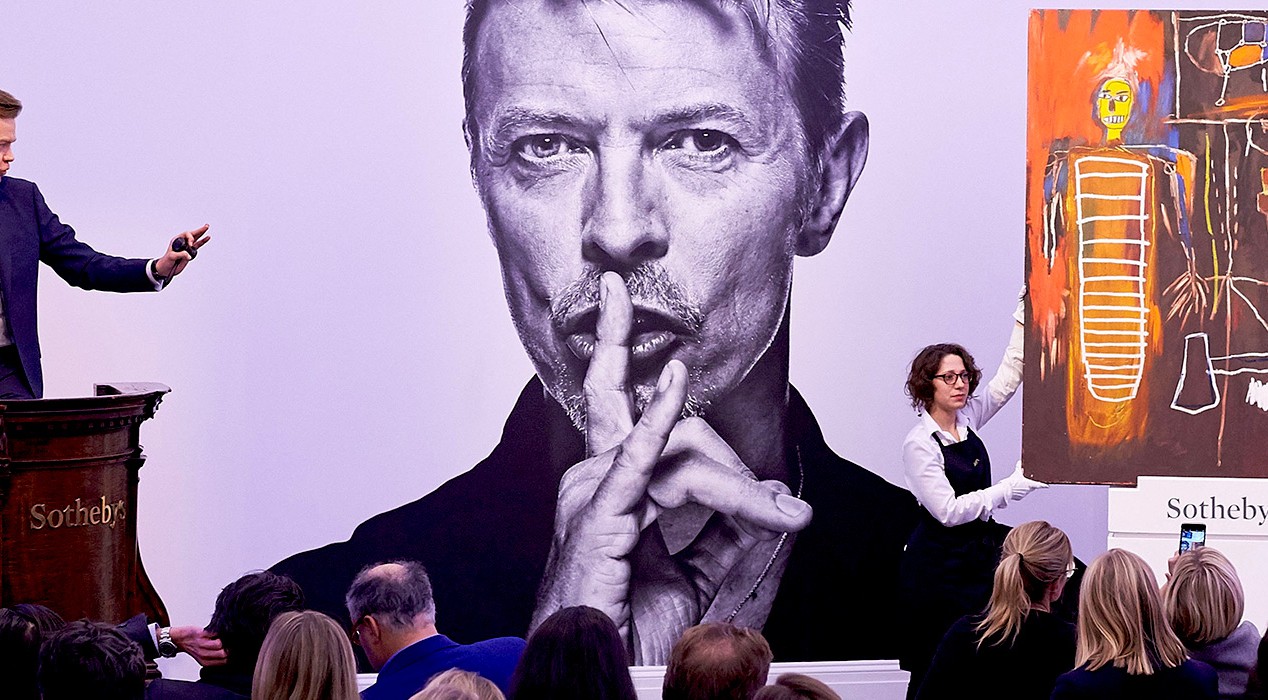 Frances Christie (Senior Director Head of Department for Modern & Post-War British Art at Sotheby’s) delivered the graduation address to the class of 2017 at Sotheby’s Institute-London. Ahead of that address, Christie sat down with Sotheby’s Institute-London CEO at the time, Jos Hackforth-Jones, to discuss two major sales she spearheaded: the private collections of David Bowie and the Howard Hodgkins. An excerpt from that conversation is below. (Watch full interview)

People get really inspired by seeing what inspirational people that they know and admire are interested in. There are two interesting things about [David Bowie’s collection]: that someone as musically talented as he was also had a lesser known side as a collector; and then beyond that, as a collector, he chose to collect 20th Century British Art.

Bowie didn’t collect Gerhard Richters and Andy Warhols. He chose to collect Henry Moore, Winifred Nicholson, William Scott, Kenneth Armitage—names that are the core of the Tate Britain collection, but perhaps are lesser known on the west coast of America. His collection introduced these artists to a wider world and raised their exposure—many of them perhaps not so well known outside Britain.

The same can be said for Howard Hodgkins. He really is principally known as one of Britain’s most vibrant painters. But behind that (and what was so special about his own collection) was that it really was a myriad of different disciplines. He had incredible Indian art, Islamic art, European sculpture, furniture, textiles, rugs...such a rich cacophony of objects. That was a revelation in so many ways and it made people understand where his understanding of textures and colors came from.

[Bowie] collected without any hierarchy. He didn’t mind whether it was oil or watercolor or pencil and so he really inspired both top collectors, and also new collectors, that anything goes. As long as you’re really passionate about it and really interested in it, it makes your collection so much more intriguing...if you follow an instinct, if you follow what you like, and if you collect organically.

“Sundays at Sotheby’s” are very informal gallery talks where we invite academics or Sotheby’s staff to talk about key points in the exhibitions. One of the great privileges of auction houses is that, unlike a museum, we handle these incredible museum-quality works of art for a brief moment only. That gives a chance not just for collectors but any art enthusiast to come in and experience these objects and paintings before they disappear again.

You can learn so much more about pictures, objects, furniture in an auction house because you can ask a specialist to help you touch it, to look at the back, to pick it up, which you obviously can’t do in a museum. One of my top tips in an auction house is to ask to look at the back of the picture. The back often says so much more than the front. I think that’s something that is amazing about the Institute students...they have that access early on. When I was at university, I had no idea how to handle a picture. It’s often one of my interview tests when I put out works of art for prospective interviewees to look at. So many of them don’t pick up the picture. They don’t have a natural instinct to explore it. Often we ask [interviewees] to tell us who the artist should be and often it just says it on the back. So, if they picked up the picture they would see it!

Develop your eye for collecting with our programs in London, New York, and Online.