The Misunderstood Objects of The Kiddell Collection

Home News & Events The Misunderstood Objects of The Kiddell Collection 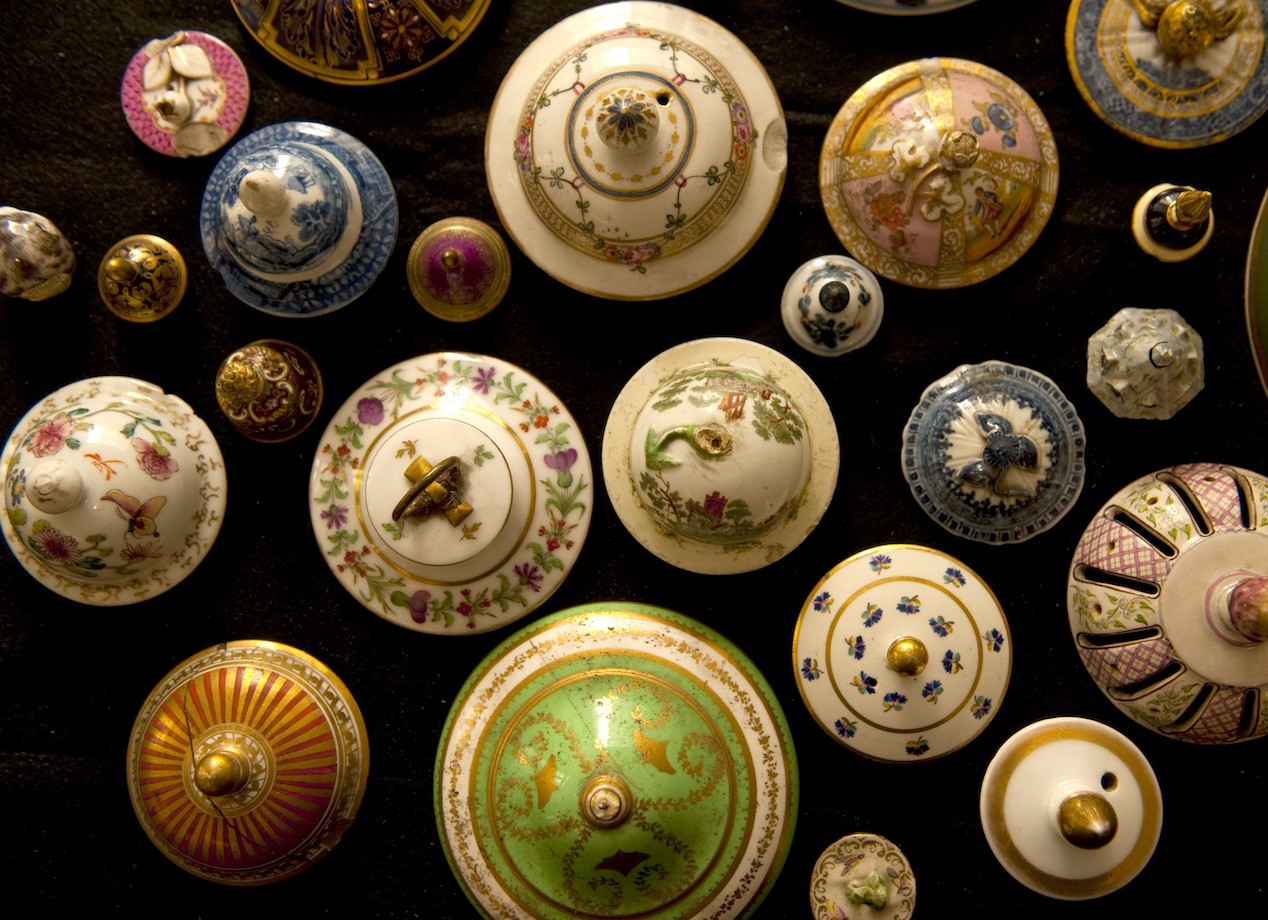 Tucked away in London’s bucolic Bedford Square, Sotheby’s Institute of Art maintains a unique collection. The Kiddell Collection (also reverently known in decorative art world circles as "The Black Museum") is a fascinating and esoteric accumulation of fakes, forgeries, and reproductions, built up over a number of decades by Sotheby’s Auction House former Director, Jim Kiddell, and on permanent loan to Sotheby’s Institute of Art-London. Originally formed as a pedagogic handling tool for auction house specialists, the Collection today continues to support student enquiry. It also is of scholarly interest to specialists, scholars, and collectors, who regularly use the Collection to further their knowledge, and who contribute to its evolving interpretation and authentication.

Elisabeth Bogdan, Course Leader for the Institute’s Decorative Art and Design Semester Program, has been revealing the provenance, materials, techniques, and idiosyncrasies of the Collection since 2003. We sat down with her to discuss the Collection, its history, and its importance to students and art connoisseurs.

Tell us a little about the Collection.

The Collection is owned by Sotheby’s auction house. It comprises fakes, forgeries, and reproductions. I've recently started adding another word to its title, though it’s not official: "Fakes, Forgeries, Reproductions, and the Misunderstood."

The story and texture of the Collection evolved over more than forty years, guided by Jim Kiddell, one of Sotheby’s most innovative and magnanimous Directors, who worked at New Bond Street between 1921 and 1979.

How did he build the Collection?

There were two main ways: first, objects sold through the saleroom would be returned by buyers for not reflecting the catalogued pre-sale description. The important and historic proviso for auction buyers, caveat emptor (or "Buyer Beware") still is maintained globally today as a contractual understanding. Nonetheless, auction houses reasonably and ethically often must bear the financial burden of mis-attribution and incorrect cataloguing. Sometimes, even with extensive research and knowledge, specialists get things wrong. Collectors often have doubts even after an auction house purchase, consider other specialist advice, and return to the auction house dissatisfied. Imagine that you have paid a buoyant price for an important piece of English 18th century porcelain, such as Chelsea. Then, after the fact, you seek out a second opinion from a respected and long-standing Kensington Church Street dealer in London who comments, "Ah yes, we saw that in the catalogue and wondered." This sows enough doubt, with evidence, that you return to the auction house. You are paid back the hammer plus premium monies…and now the auction house is the owner of your returned item. But what shall they do with it?

The second way was more usual some decades ago than it would be today. A consignor would come in for a valuation (and hoping to sell) to be told that their object was not of the authentication or value they thought. In despondence or frustration the piece would be left at the Valuation Desk ("For that disappointment I won’t be taking that back home with me!"). Thus, we have another way Jim and his colleagues were able to build up a collection of things not "quite clear" or "quite right" or, as I like to say today, "misunderstood." This second way I think happens infrequently today. Nowadays, if there is decorative value, there is a way to sell. Even if something is not as we were told, or led to believe, etc., there are so many second-hand markets to mine—eBay, for example. People are less willing to leave the "disappointing" objects with auction specialists just because they promise a less-than-lucrative outcome. There are many ways today of moving on every kind of art object, "true" or "less true."

You examine these objects so that you can see how things were and are made. Not only, however, are you considering their production, but also, their consumption—considering how people in the past used objects to try and unpack their cultural meanings, which helps us to determine authenticity, or to revise former suppositions as to whether an object is "true" or "good." Even if something is an out-and-out fake or forgery, experts (and yes, even our students) can come to know this or suspect it. We do have some very interesting objects in the Collection that were made as recently as the 1970s, but have been made to look like 17th century pieces, perhaps buried in the backyard for 10 months to give it a time-worn patina. Some experts recognize "challenges" because they were working or studying around the time when types of these "challenging" objects were being touted through the auction houses and even through museum departments.

Over the decades—it was very informal, maybe a few times per month depending on what had come into the auction house on consignment—Jim would say to his colleagues, “Let's talk about the materials. Is it porcelain? Is it earthenware? Is it tin-glazed? How was it produced? If it was produced in this way, and in this material, then how can it can purport to be the thing that it seems to the amateur eye to be?” Imagine a scenario: a potential seller arrived at the Sotheby’s Valuation Desk and said, “I have a piece of Chantilly porcelain” (one of the most coveted and collectible types of early 18th century French porcelain with a lead and tin glaze) "…made of stoneware." Just as any 18th century ceramics specialist today would know, Jim and his colleagues knew that there was no way it could be that (Chantilly) thing. Perhaps it looked very much like Chantilly, but the foundation materials puzzle didn’t fit. Building up anomalies and questioning how variables fit together, like a detective’s approach, are key ways of empirically determining authenticity, and in many cases, re-attributing pieces. In this way I think many objects in the Collection are still "misunderstood." They have presented challenges in the past; however, they’re not "untrue" or "bad"—but, rather, need now to be acknowledged differently.

As fine and decorative art scholarship changes and grows, objects that may have once been considered to be a fake or a forgery now can be seen in a different light. Scholarship isn’t reversing past authentication necessarily; rather, an art object may have been "misunderstood." It was never made to deceive—possibly to emulate or "reproduce," but not to deceive. It was made like an obvious faux Louis Vuitton bag or a South Korean Supreme t-shirt where the market does not think for a minute these reproductions or emulations are "the real thing." South Koreans cannot buy the real Supreme; instead, they have built up a whole new branding and merchandising product style and economy that has its own value.

So, there’s a market for these types of reproductions?

In the 19th century there was a successful and entrepreneurial French ceramics manufacturer who was accomplished at his craft and industry. He had a reasonably large factory that could produce high quality ceramics of both porcelain and earthenware. He saw a gap in the French and European bourgeois market, catering to customers who wanted new reproductions, or "in the style of" historic European or Asian ceramics. This growing market was interested in attractive decorative objects, not necessarily the eighteenth century collectibles. He thought, "I can do that!" As research and scholarship has moved on in the past fifty years, specialists, scholars, and collectors now value him as an interesting producer in his own right. The value of these objects today are not always so great (it is doubtful that Sotheby’s would sell them, for example), but with value enough for some smaller and regional salerooms to arrange the occasional single-manufacturer feature sale.

How did the Collection come to reside at the Institute?

In part due to the accumulation of objects in the post-war years, the Collection and its meaning gave fruit to the idea of educational training and courses for more than internal specialists. In 1969 Sotheby’s launched its Works in Art Course (WOAC)—a formal course attended by in-house specialists and cataloguers, but also open to non-Sotheby’s participants. WOAC was an important first step in developing what now is our global Institute. Originally held at New Bond Street, it became accredited when the Institute moved to its London Oxford Street premises, and then university-validated two decades ago to what eventually has become our MA in Fine and Decorative Art and Design.

Is the Collection just for students?

It’s not just for students. There are groups of knowledgeable and enthusiastic scholars and collectors who know about the Collection very well: the French Porcelain Society, the Northern Ceramic Circle, and the English Porcelain Society, for example. Membership in these groups allows you to visit important collections, handle pieces, share information, and expand connoisseurship. So they do occasionally come to see us. I would like that to happen a bit more, actually.

Can you tell us about one piece in the Collection?

We have a large slipware (earthenware) charger decorated with a swan and her signets. It is intending to be a 17th century piece of pottery by a documented and collected English potter named Thomas Toft. Toft was known to sign his wares "Thomas Toft" on the rims of his chargers. British and American collections are full of these early modern naïve and vernacular objects. Late 17th and early 18th century English slipware is collectible because it is a representative example of early modern ceramic production in Britain. For decades Americans particularly supported and increased the market, such was their enthusiasm in the 1970s and 1980s. Valuations and prices were high—in the region of tens of thousands of pounds and even up to £100,000. The effect of fakes on the market, across a number of decades, obviously has had an impact. Nonetheless, a "fresh" piece of Thomas Toft slipware, with good provenance and the right markers, of course is still of enormous interest to the art world. At one point a faker would have considered it lucrative to deceive—not so much today, which is why it is so useful to have an example in the Collection.

How do we know it's a fake?

The art world assumes that fakers and forgers deceive solely for financial gain; however, there are other reasons too. If you are a confident and convincing fraudster who manages to deceive, how are people to know of your craft? They won’t, because they’ve been deceived. Sometimes the desire for celebrity is stronger than remaining safe and incognito. And loose talk carries the risk of getting caught. Regardless of whether we are considering fakes, forgeries, reproductions, or the "misunderstood," the reward of scholarship and collecting is building the pieces of the puzzle together, perhaps looking for a little hieroglyph or anomaly, and then either confirming authenticity or creating a new one.

Build your art expertise with our Master's programs in London or New York.