The Spectacle of the Female Nude

Home News & Events The Spectacle of the Female Nude 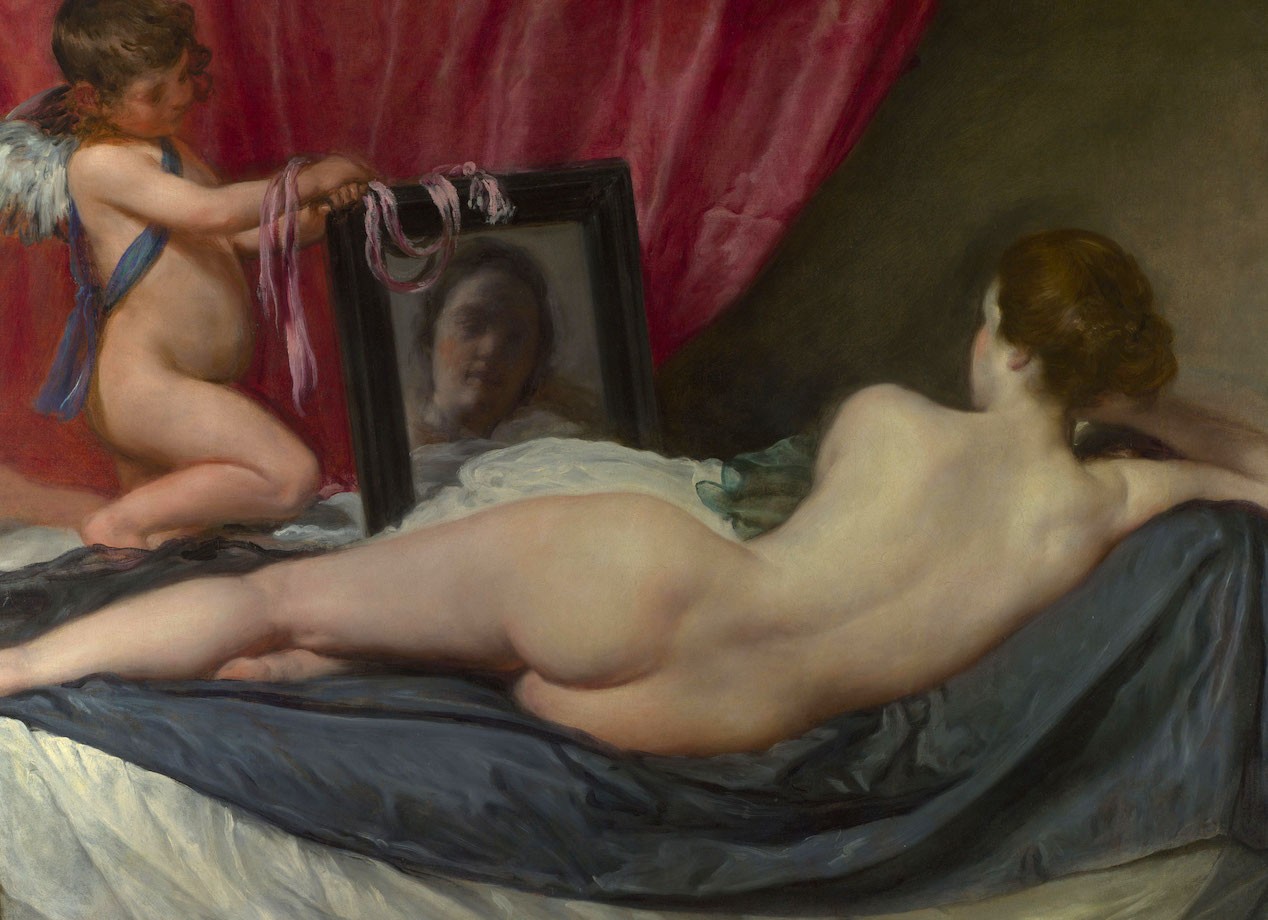 Faculty Catherine McCormack visited London's National Gallery to gaze upon and dissect a Diego Velázquez masterpiece. She recounts the viewing process below.

I'm standing in room 30 of the National Gallery in London in front of the Rokeby Venus by Diego Velázquez, one of the collection's most famous images. In this image, Venus is pictured with her back to the viewer. Her skin is glowing and opalescent. Our eyes drift over the serpentine lines and the flawless terrain of her firm body with its tiny waist. Her body is idealized. It is far from reality, far from anything we would see naturalistically everyday. It's an intimate encounter between this body and the viewer. It feels as though we are voyeurs, gazing at the goddess while she reclines on satin sheets, completely nude. It's almost as if we have entered her private bedchamber to spy on her.

A winged figure of cupid holds up a mirror in front of Venus. This mirror frames her features. It is a bit out of focus but, just through the murkiness, we meet her gaze. Our eyes meet hers. She knows that we are admiring her body and her passive expression in the mirror seems like a type of consent or acknowledgement for this feasting over her naked body. 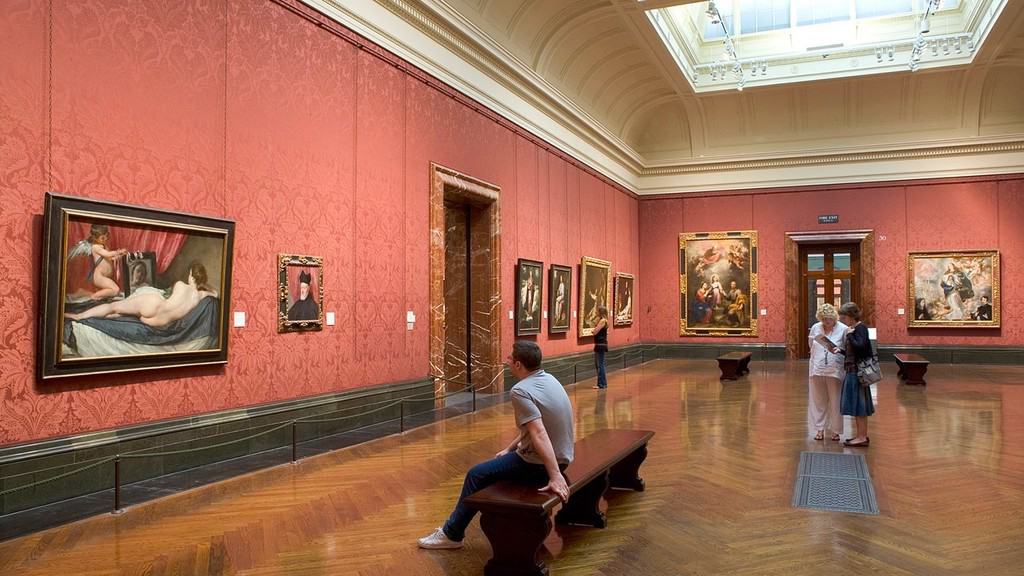 In room 30, the painting has a steady flow of visitors. I can see students copying her curves. I see the adoring gazes of passers by. While I'm sitting here, I'm trying to lipread the exchanges of various viewers amongst themselves. One of the words that repeats itself quite often is "beautiful." But, the painting's history in the 20th century speaks not of beauty, but of something more violent. 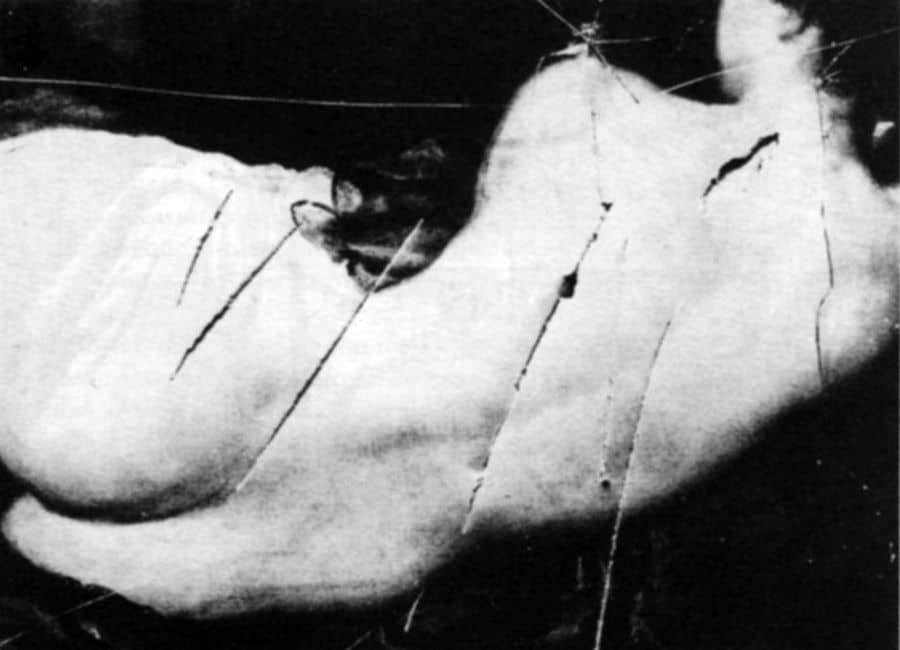 In 1914 Mary Richardson, a member of the suffragette movement, walked calmly into the National Gallery and proceeded to attack Velásquez's Rokeby Venus with a butcher's cleaver that had been concealed in her coat. Richardson was emboldened by the mantra of the women's social and political union. This mantra was the idea that it was deeds and not words that would help the suffragettes to realize their ambitions of gaining the vote for all women.

This act of protest left deep gashes across the surface of the canvas and the surface of Venus’ body. Richardson readily gave herself up for arrest and was said to have explained her actions as an attack on “the most beautiful woman in mythological history”—that being Venus, the goddess of love and beauty—as a response to the British government's brutal treatment of “the most beautiful character in modern history.” The person she was referring to was Emmeline Pankhurst, the founder of the women's social and political union, who had been repeatedly imprisoned and treated very badly by police.

If you look closely, underneath the glass covering the painting, you can still see some of the scars that remain after restoration. Interestingly, the wall text next to the painting does not speak at all of this quite crucial part of the painting's history. 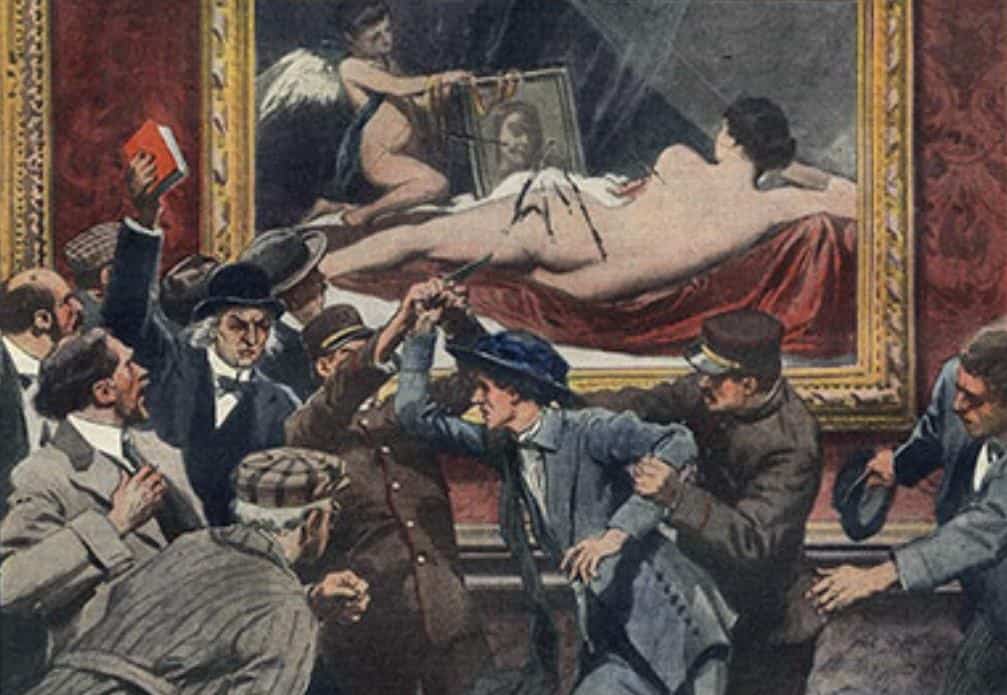 The event was sensationalized in the contemporary press of the time. Mary Richardson even earned the nickname "Slasher Mary." It was almost as if she had carried out a bloodthirsty slaughter of an actual live person rather than a painting of a woman with no clothes on.

Let’s consider what the nude body of a woman in a painting represents for the gallery-going public and our culture at large. Such is the ubiquity of the female nude in art history that perhaps we stop thinking about what it actually represents and view it instead as a visual shorthand for abstract ideas of art, beauty, and culture. In fact, Velázquez’s Venus features on the gift pack for purchasing membership to the National Gallery. In many ways, this image of a naked woman has become a visual shorthand for representing high culture and art history at large.

This painting is not the only female nude (or the only image of Venus) in the National Gallery collection. There are over 100 images of Venus in the collection and, in almost all of them, she features as a woman with no clothes on. The sight of naked women has become completely normal when visiting a collection of historical painting. They often appear in the guise of mythological characters. If not Venus, other goddesses from classical mythology—such as Juno and Minerva—are on display. They also appear as nymphs, maidens, or even biblical characters, such as Suzanna.

Perhaps it is time to rethink this normalized spectacle of female nudity, which is so often conflated with culture, and think about the sexual politics at play behind these images. I want to unveil these works as thinly disguised equivalents of modern day pinups that have a titaliating purpose to fuel the fantasies of the male viewers that originally owned them. 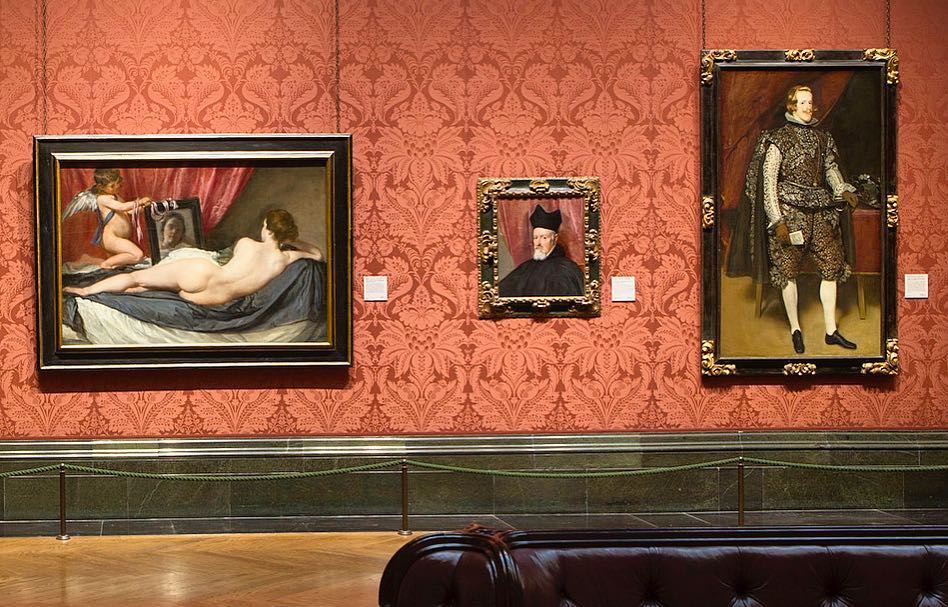 Let's go back to the Velázquez’s Venus. She is the only nude in room 30. The canvas sits in the center of the wall on which it's displayed and is flanked by two paintings of illustrious men in portrait form. These are bookended, on either side, by full-length portraits, also of men—one of these being the Spanish King, Philip IV. This creates an effective ownership of Venus, a sense that these men are somehow the custodians of this naked body or that they own access to the enjoyment of Venus. For this reason, we can think of this painting as being produced for something that feminist historians of visual culture have called, "the male gaze." This term suggests that the implied spectator of an image is a heterosexual male who’s investing desire in the subject matter of the painting; or that the image has been produced, quite simply, for this unidentified male spectator's viewing pleasure. Perhaps this goes to explain, in some way, why Venus remains such a popular subject to this day.

Dive deeper into the world of women and art with our courses in London, New York and Online.